Galliers will replace Baroness Diana Warwick as chair of the trade body, which represents 800 housing associations in England, in September. 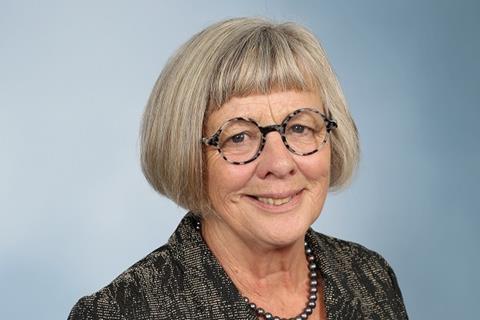 Maggie Galliers is the new chair of the National Housing Federation

Galliers has more than a decade of non-executive experience in the education sector, recruiting and advising chief executives and executives. Before this she worked in various leadership roles in a career spanning 40 years, including 16 years as principal of Leicester College and Henley College in Coventry. She was awarded a CBE in 2009 in recognition of her services to local and national further education.

Kate Henderson, chief executive of the NHF, said: “Maggie’s wealth of experience was striking, alongside her passion for providing people with the essential tools to succeed in life. Coming from education, she brings to the role a strong understanding of the links between decent housing, inclusion and people reaching their full potential.

Galliers said: “I look forward to getting to know housing association members across the country and the full diversity of the work they do to support residents and their local communities.

“I hope to make a valuable contribution to their mission which, at a time when life is getting harder for the poorest in society, has never been more important.”

The NHF has recently voiced opposition to the government’s proposal to extend the Right to Buy to housing association tenants. Henderson said she was “deeply concerned” about the long-term impact of the policy should it brought in and said previous pilots of the policy had shown that not enough money was raised from the sale of tenanted homes to build replacement social housing.

The federation has also said it has been in talks with the government about its plan to replace the system of section 106 planning gain – under which developers often agree to a percentage of homes in a development being affordable as a condition of planning approval - with a new infrastructure levy. Section 106 accounts for nearly half of housing association delivery, according to Savills.