House prices will peak later this year before dropping by around 5% in 2023 and 2024, economists have forecasted.

Capital Economics (CE), an independent economic research consultancy, now thinks prices will drop in the next two years reversing around a fifth house price growth since the start of the covid-19 pandemic. 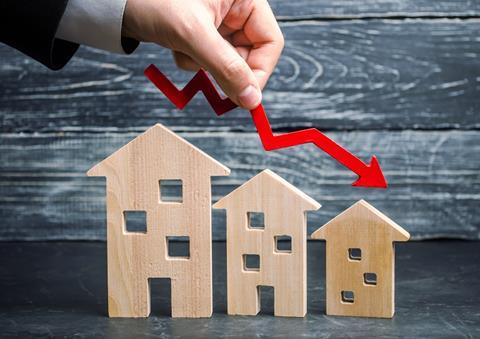 It says price growth this year will be stronger than previously anticipated, due in part to limited amounts of available housing stock and will hit 9% year-on-year in the final quarter of 2022.

It said CPI inflation is on track to peak at 10% later this year and predicts average mortgage rates will rise from 1.6% at the start of this year to 3.6% in mid-2023.

It said: “The first signs that the market is on the turn are already appearing. Google trends show that visits to property websites dropped back to their lowest level since May 2020 this month, and the RICS housing survey suggested that quarterly house price growth will cool to zero by the third quarter.”

It said: “First, while the house price-to-earnings ratio is roughly the same now as in 2007 we do not anticipate a return to pre-financial crisis mortgage rates of 6%, so the cost of mortgage repayments will remain much less of a burden.

“Second, strong pay growth means a modest fall in prices will be enough to return the house price-to-earnings ratio to a more sustainable level.”

The forecasts come amid data showing house prices continue to rise in the short-term. Property portal Rightmove on Monday reported a ‘spring frenzy’ in the market with house prices hitting a record high in all regions of England and Scotland for only the second time in 15 years.

The most recent data from Halifax earlier this month showed house prices have risen for nine months in a row, while Nationwide has also reported “surprising” growth at a 17-year high. The Royal Institution of Chartered Surveyors reported a jump in new buyer enquiries.