Michael Gove has agreed he wants to see greater funding to build more social and affordable housing in order to meet the government’s 300,000 homes-a-year housing target.

Giving evidence to the Levelling Up, Housing and Communities select committee, the housing secretary said the 300,000 homes-a-year manifesto pledge remained a government target, but that it was not clear whether it was achievable, given economic headwinds, without a big uptick in the delivery of social housing.

Gove said he wanted to see the number of social homes built each year increase, then appeared to agree with the assertion of the committee chair, Labour MP Clive Betts, that a significant increase in social housebuilding would only happen with a major increase in funding. Gove responded to Betts’ call for a new and increased spending profile by saying: “Quite. More to do.” 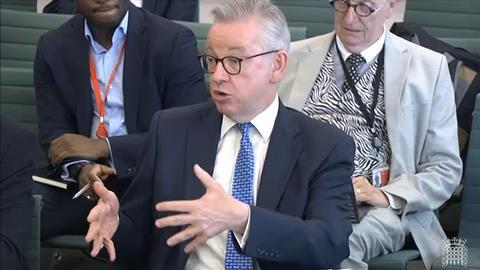 Michael Gove at the committee hearing at Portcullis House

This is not the first time that Gove has made clear he favours building more social housing, but it appears to be the first time he has accepted the likely need for more government cash to enable that to happen. However, it is not at all clear what the prospects of Gove persuading the Treasury to find more money for social housebuilding are, given current funding constraints, and the need to fund last week’s Right to Buy programme for housing association tenants.

The government has already committed £12bn to a five-year affordable homes programme, designed to fund the construction of 180,000 homes between 2021 and 2026. However, the select committee has previously called for this programme to be increased to allow for construction of 90,000 affordable homes per year, at an annual cost of around £10bn – far in excess of the current programme.

Government housebuilding data indicates that build volumes have in the post war period significantly exceeded current levels only when council or other affordable housing types are contributing a much bigger proportion of the mix than currently.

Asked if the 300,000 home housebuilding target remained in place, Gove said it was, but asked: “Will we meet it? We’ll do everything we can, but there are a number of factors that are going to make it and have made it more difficult.”

He later said that the private sector had been the “driving force” behind hitting recent housebuilding highs of 244,000 net additional homes a year, but accepted it was possible build rates might now fall. “Historically, when Conservative governments have hit 300,000, it has been with the private sector and social housing together, contributing to hitting it”, he said, adding he “definitely” wanted to see more social homes built each year.

His comments come after Gove in May appeared to row back from the 300,000 home target, suggesting the government will not feel bound by it.

Gove also used the session to defend changes to planning reforms, which many in the housebuilding sector have characterised as giving in to anti-development sentiment. He said the changes, now contained in the Levelling Up and Regeneration Bill, were “reasonable, not radical”, and that by rowing back on the most controversial elements, he would actually unlock more development by bringing people along with him.

Gove said: “When people talk in those terms [of radical reform] then I think individuals and communities feel “oh, I’m going to be disempowered”. Allowing them to feel that they have control, through a plan led system, over the nature of development, I think will unlock more development than the ultra-rapid solutions that some people put forward.”

See also: Power in planning politics may be shifting too far toward anti development groups

The housing secretary also confirmed that plans for one million homes in an arc of development between Oxford and Cambridge have been dropped. Asked about the figure of one million homes, Gove said that both Oxford and Cambridge would see housing growth, but that “some of the figures that have been bandied around about housing growth are related to the Ox-Cam Arc have been both inflated and unhelpful.

“The idea that you create a sort of a ribbon development between Oxford and Cambridge as intense as that which has been suggested, I think, is overstated.”

Last year then housing minister Chris Pincher said the one million homes target was “not government policy” – despite it coming from a government commissioned report by the National Infrastructure Commission which was fully accepted at the time. Earlier this year, a report by officers at South Cambridgeshire council said the Department for Levelling Up, Housing and Communities had ditched the project since Gove’s arrival.