The new secretary of state for Levelling Up, Housing and Communities, speaking at a Conservative Party conference fringe event, added that he was concerned the supply of social housing hadn’t kept up with demand.

According to reports of the event, he also implied he will look to advance policies making it easier for potential first-time buyers to secure mortgage finance.

Gove’s comments imply a potential change of direction for the government, with delivery of social housing having plummeted in the wake of post credit-crunch reforms to funding pushed through by the Tory -Lib Dem coalition. These reforms saw government funding switched to prioritise much more expensive “affordable rent” products, which required minimal grant per unit.

Typically, between 6-7,000 social rent homes have been built in England each year in the past three years, compared to between 30-40,000 in the last three years of the last Labour government, according to government figures.

In addition, supply of social housing has been squeezed by a 2021 revamp of the Right-to-Buy programme, since when more than 96,000 social rent homes have been sold. 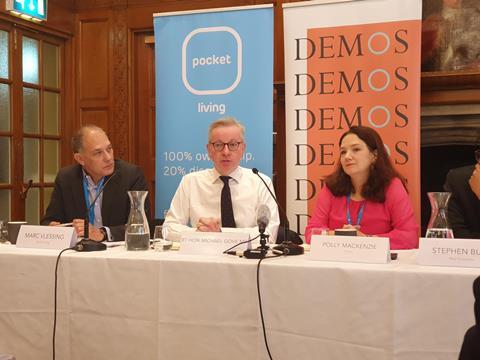 Michael Gove, speaking at the event alongside Marc Vlessing of Pocket (left), and Polly Mackenzie of Demos

Gove said: “If you… want to rent or you are eligible to rent social housing, […] the supply of social housing overall has not kept pace with the demand.

“I think we definitely need more social housing and there may be some people who because of circumstances will be in social housing for much of their adult life, we must ensure that it is attractive, decent and well-integrated with the rest of the community.”

During his 2016 leadership campaign he had called for “a national ambition to build hundreds of thousands of new homes a year, both private and socially-rented – led by someone who will not take no for an answer and who will push for diggers in the ground and homes for all come what may.”

>> Seven things you need to know about Michael Gove and housing

>> A mountain of priorities: What’s in Gove’s in-tray?

At yesterday’s fringe he added that the quality of social housing in some parts of the country “remains scandalously poor.”

“It is also the case that we do need to look at the condition of social housing and the way in which we can make sure that there is proper incentivisation for those who are social housing providers both to improve stock and to increase numbers.”

Gove’s comments about the condition of social housing properties follow a series of investigations by ITV news, which have forced the regulator to investigate a number of social landlords, including Clarion, which was later cleared of breaching the regulatory code.

He also implied that the government would be looking to make it easier for potential homebuyers to access the market, despite the government having already announced it is ending the Help to Buy scheme in March 2023. Gove said: “So, it is the case that we do need to look at access to finance overall, I won’t say much about that at this stage.”

Gove made the comments at a fringe event hosted by Demos and developer Pocket, after delivering a keynote conference address largely focused on the delivery of Boris Johnson’s Levelling Up agenda.