New housing secretary Michael Gove failed to address reports he has demanded a complete rethink on planning reforms in a keynote address to the Conservative Party conference which did not mention planning at all and mentioned housing only once. 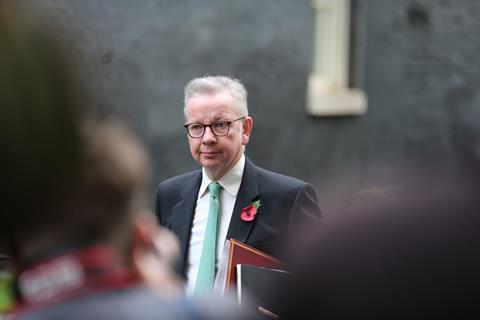 In a speech that appeared to confirm speculation that Gove sees the levelling up agenda as his priority task above addressing the housing crisis, he said he saw his task as “allowing communities to take back control of their futures, and creating greener and more beautiful places to live”.

However, his discussion of housing and development took up little over 100 words of a 1,300-word speech mainly focused on setting out his vision of what Boris Johnson’s “levelling up” slogan might mean.

Gove’s appointment in last month’s reshuffle coincided with prime minister Boris Johnson giving the department the job of driving through the government’s “levelling up” efforts, with the department rebranded as the Department for Levelling Up, Housing and Communities.

Gove said he wanted levelling up to deliver strengthened local leadership, an increase in living standards and improved public services in more deprived areas, and people given the “necessary” resources to restore local pride.

On housing, Gove said the government will invest in urban regeneration to put new homes on “neglected brownfield sites”, while at the same time “helping more of those who currently rent to own their own homes”.

He did not mention the planning system or the controversial planning white paper, on which the government is thought likely to perform a significant U-turn. However, his reference to “allowing communities to take back control of their futures”, is likely to be read as a hint the more centralising proposals in the white paper – such as the removal of the ability to stop individual applications in growth areas from being approved, or the imposition of mandatory local housing targets – will not be carried forward.

Speaking at a fringe event launching a report on localism, Gove yesterday said he was an “optimist” who believed “we can build the hundreds of thousands of new homes we need in this country”, but that homes built in recent years hadn’t been well designed.

His comment came after Conservative Party chairman Oliver Dowden conceded the government was “looking again” at the planning reform proposals launched by Boris Johnson and former housing secretary Robert Jenrick last year. Dowden said the Conservative Party had “the wisdom to listen to people and the humility to learn how we can do better” and that the government wasn’t proposing to “rip up” planning controls.

Dowden hinted the government was planning proposals to “set out in law measures to protect our towns, villages and precious countryside from being despoiled by ugly development”.

Tom Fyans, deputy chief executive of countryside charity the CPRE, said the commitment to building on brownfield sites in Gove’s speech “signals the mood music on the government’s planning proposals has changed genre – and that our countryside and green spaces are now in safer hands since the reshuffle.

“We hope this ushers in an age of positive changes to our planning system. We look forward to working with the government, local CPREs and rural communities to turn the housing secretary’s words into actions for people and nature.”