Housebuilder St Modwen has signed a deal with West Midlands mayor Andy Street to build 5,000 homes on former industrial sites in the region over the next ten years.

The Memorandum of Understanding with the Birmingham-based housebuilder came as the firm submitted an application to build 350 homes on part of the former MG Rover car plant at Longbridge.

The West Midlands Combined Authority, which is putting £6m of funding in to the “West Works” scheme at Longbridge, said in a statement that the wider deal with St Modwen will help it deliver its overall commitment to build 215,000 homes by 2031. 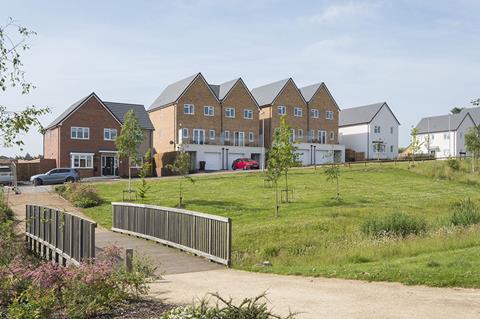 St Modwen has already built some homes on the Longbridge site

The combined authority said the overall investment in the West Works scheme will top £300m, and that the scheme will open over 1km of the River Rea to the public for the first time.

The intention is that the wider regeneration of Longbridge will see up to 2,800 new homes created alongside two million sq ft of commercial floorspace.

All of the 5,000 St Modwen homes will be built to the energy efficiency requirements of the Future Homes Standard, the combined authority said.

Andy Street said: “By working with St. Modwen we’ve managed to unlock one of the region’s most iconic brownfield sites – Longbridge’s West Works. I am therefore delighted that we’ve signed this MOU to continue to work together on more schemes in the future, as we look to build more homes and create more jobs right across the West Midlands.

Robert Flavell, senior director at St. Modwen said he was “proud” of the deal. He said: “Our plans for West Longbridge will deliver high-quality, energy efficient and environmentally friendly new homes, new commercial space which will bring investment and jobs to the town and a range of green spaces for people to enjoy.”

The deal comes as St Modwen is in the midst of being taken over by US private equity giant Blackstone in a £1.3bn deal driven by St Modwen’s portfolio of logistics developments. Housing Today understands that if the deal goes through, Blackstone intends to support St Modwen’s current expansion plans for its 1,000 homes-a-year housebuilding business, but not necessarily seek to grow faster than currently planned.