The growth plans of SME housebuilders have been badly affected by the coronavirus crisis and are likely to be damaged further by new restrictions on the use of Help to Buy, according to recent research.

A survey of firms, conducted by the Home Builders’ Federation (HBF) and Close Brothers Finance, found that two-thirds of small and medium-sized builders had reduced their growth projections in light of the pandemic. Most said the hit was between 10 and 50%.

The report follows a collapse in the number of SME builders over the past 30 years. The proportion of homes produced by SMEs has dropped from one in four in 1988 to just one in 10 today.

The survey also highlighted the extent to which SME builders rely on the government’s Help to Buy scheme. It found that three-quarters made use of it, with those that do saying it accounted for on average 39% of sales.

Respondents raised fears about the impact of changes in April next year, which will restrict the scheme to first-time buyers and see regional price caps imposed. These will limit the cost of eligible homes and were described by one respondent as “ridiculously low”.

Overall, the survey found that planning problems remained the biggest concern of SME housebuilders, with 83% describing delays in securing permissions as a major barrier, and 73% bemoaning the lack of resources in council planning departments to process applications.

Stewart Baseley, executive chairman of the HBF, said support for SME builders was vital in the wake of the pandemic. He added: “Increased bureaucracy and regulation and a harsh operating environment have seen the number of SME builders plummet in recent decades. The government needs to work with industry to develop policies that allow SMEs to grow.” 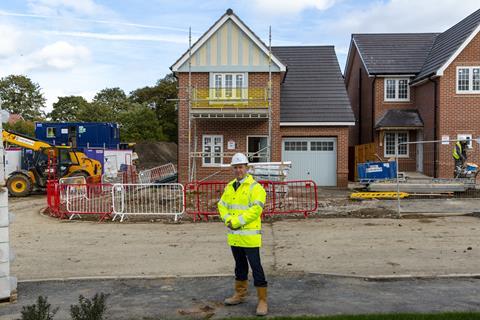 However, Kevin Marren, managing director at Eccleston Homes (pictured, right), an SME builder in the North-west, said the changes to Help to Buy would rule out nine in ten of its existing sales under the scheme.

He added: “Currently approximately 60-70% of our buyers use Help to Buy, however, under the regional caps the vast majority of our properties (probably over 90%) would fall outside of the new price banding, which is extremely low at £224,400.

“While the housing market is currently looking positive, we face having our legs cut out from under us next year, when the stamp duty holiday ends and the regional caps are introduced.”

Many builders stopped work on site following the lockdown on March as they adapted to social distancing protocols and the government closed the home-buying and selling process. While the housing market has so far bounced backed strongly, listed builders have already reported large falls in completions of commonly around 30%. A number have reported losses.

There are also early signs that the surge in home-buying seen since lockdown rules were lifted is waning.

Frank Pennal, CEO of Close Brothers Property Finance, said: “The threat to SME housebuilders following the covid-19 pandemic is clear, and we now have to act to reverse the decline of this vitally important part of the housing market.

“This research underlines the need to support and protect SME housebuilders, which have consistently demonstrated their value when it comes to economic growth and directly supporting the local communities and micro-markets in which they operate.”