Plans for a new Infrastructure Levy, published by housing minister Robet Jenrick today, will see at least as much money raised to pay for local infrastructure and affordable housing as by the existing system of developer contributions in the planning process.

The plans were part of a sweeping overhaul of England’s planning system which would see section 106 agreements and the Community Infrastructure Levy (CIL) scrapped and replaced by a new Infrastructure Levy, applied at the point of occupation.

The rate or rates of the Infrastrucutre Levy would be set nationally as a proportion of the sale value of a development, above a minimum threshold. Currently CIL is set locally and section 106 contributions are subject to detailed negotiation, while both CIL and Section 106 levies are more often levied prior to commencement of construction onsite, thereby impacting upon developer cashflow.

The decision to make the new levy payable upon completion of a development will mean that the council will have to itself fund any upfront infrastructure required for a site. The government’s white paper made clear that local authorities will be able to borrow against future revenues to fund this, albeit these revenue will not be certain.

Robert Pearson, executive director at planning consultant Nexus, said the move to pay the levy at the point of sale of a development “appeals to the development industry.” He said: “The cash-flow impact is potentially significant, and i have heard from a number of clients already who are delighted about this.”

Stuart Andrews, national head of planning, at law firm Eversheds Sutherland, said: “The proposals relating to the Community Infrastructure Levy are as flawed as the last attempt to standardise infrastructure contribution structures, and the naive suggestion that Councils will borrow to fund developer infrastructure delivery simply serves to demonstrate this point. 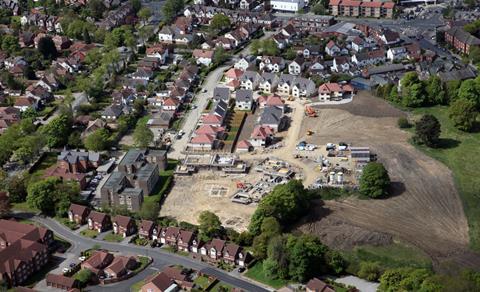 The new rules have come under fire from the Chartered Institute of Building, which warned that local authorities will face a greater financial burden under the new system.

It said: “Without Section 106 agreements or Community Infrastructure Levy contributions to offset the costs associated with provision of community infrastructure, local authorities are further financially burdened.”

The new Levy will also only be applied above a certain threshold, meaning smaller developments will not be impacted.

Great Marlborough Estates co-founder Dean Clifford said: “It is crucial that the government commits funding to traditional affordable rented housing and social infrastructure such as new schools and hospitals as the revenue raised by the new single levy alone won’t be enough, especially if developments below a certain size are exempted from contributing.”

Royal Town Planning Institute chief executive Victoria Hills said that more thought was required on the new system, and expressed concern that the new levy could result in less money for affordable housing, sustainable transport and other critical infrastructure.

Likewise, Kate Henderson, chief executive of the National Housing Federation, said that currently s106 was used to deliver half of the new affordable homes built each year. “Any alternative to section 106 must ensure we can deliver more high quality affordable homes to meet the huge demand across the country,” she said.

Nicola Gooch, partner at law firm Irwin Mitchell, said the system will be contentious and would completely remove the ability of either party to negotiate. She said: “It places the burden of delivery of all new infrastructure squarely on the shoulders of local authorities – who under this iteration of the new system would no longer be able to require developers to deliver road improvements or schools themselves, as part of a s.106 package on a site.”

Heather Lindley-Clapp, associate director at Nexus Manchester office said that it will be important to ensure that developments were not made unviable through the imposition of a nationally-set Levy. “It is important that any such rates reflect local circumstances,” she said.

Jenrick is likely to face extra scrutiny for reforming the Levy system after he confessed to deliberately speeding up the approval of the £1bn Westferry Printworks scheme in Tower Hamlets to help Richard Desmond, the scheme’s developer and a Conservative party donor, evade a £50m CIL charge.

During a grilling by the housing select committee in July, Jenrick insisted that it had been “a perfectly fair decision to try and get [the scheme approved] one way or another before the CIL charge came in.”

He was also asked if CIL charges should be applied at the point of application rather than the decision, which he said was “an interesting question”.

He added: “What I would like to see is a system which is more certain for all parties, both the applicant and the council and one which does deliver a fair contribution towards the social infrastructure of local communities.”