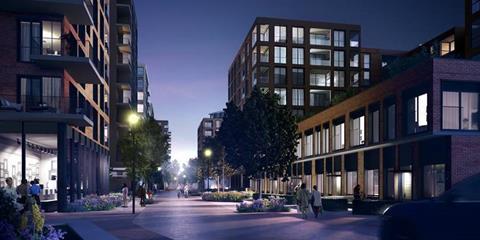 The firm said it had been in discussions with the Greater London Authority and Havering council over increasing the number of homes on the site, including an increase in the number of affordable homes.

The firm said the scheme would take the form of a “contemporary urban village” which would reinvigorate the nearby Queen’s Hospital, and could include provision of a new clinical diagnostic hub for the NHS.

Houses for the scheme will be supplied by Impact’s own modular housing manufacturing facility in Peterborough.

The firm, set up last year by property entrepreneurs Nick Shattock and Robert Whitton, said it was part of a growth plan which will see it assemble a £1bn development pipeline.

The developer was formed with the with the backing of £100m from a private family fund, using part of that cash to purchase the loss-making offsite firm Lesko Modular and thus gaining a modular manufacturing facility in Peterborough.

In November Impact Capital submitted its first planning application, for a 56-home scheme in Sevenoaks, Kent.

Havering council will consider the application this summer, the firm said. Last year Impact said it hoped to be on site with the Rom Valley scheme at some point in 2021.

Robert Whitton, founder and chief executive of Impact Capital, said: “Rom Valley Gardens will be our flagship regeneration scheme and represents Impact’s vision is to create a sustainable housing model which will help to revive underutilised sites in Britain’s cities and towns.

“By using our own modular construction factory, we are ripping up the rule book, and combining smart technology, innovative design and precision engineering to produce the sustainable and affordable buildings of the future.”