Inland Homes has secured planning approval for a 380-home mixed use scheme in east London.

The brownfield developer on Monday received permission from Barking & Dagenham Council to build 380 homes plus 930 sq m of commercial space on land next to Dagenham Dock station.

Of the 380 homes, slightly more than a quarter (103) will be for affordable tenures. 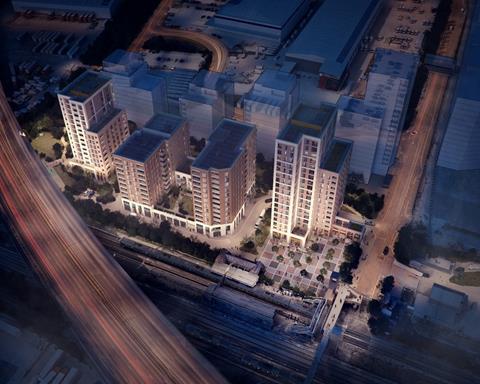 Inland will also create a new public square and undertake highway improvements to land north of Dagenham Dock railway station. Work is expected to start on site next year.

The approval is subject to a section 106 planning agreement. Inland said a decision on whether it will deliver the project entirely itself or via a contract with partners will be announced in “due course”. A spokesperson said: “This is an attractive location for Build to Rent operators and housing associations.”

The project is the second scheme Inland Homes has received approval for in the Borough, with 325 units at Merrielands currently under construction by Inland Partnerships on behalf of Clarion Housing Group.

Inland has also submitted two further planning applications, for 364 units and around 2,500sqm of commercial space across two sites. A decision on these two applications is anticipated in early 2022.

Stephen Wicks, chief executive at Inland Homes, said: “Inland has worked closely with the Borough and local landowners on our plans for the site and the approval - in less than one year since our first pre-application discussions - demonstrates Inland’s skill and expertise in securing planning consent on key brownfield sites.”

Inland Homes in May launched a petition to change the planning system arguing that it should be compulsory for planning committee members to receive training and for at least 50% to have a formal planning qualification.