House sales fell by almost two-thirds following a cut to stamp duty relief at the end of June, according to official figures.

HM Revenues & Customs (HMRC) estimates that there were 73,740 residential transactions in July, 62.8% lower than the figure recorded for June.

HMRC, in its UK monthly property transactions report, said this was due to “significant forestalling activity” as taxpayers completed transactions earlier to take advantage of temporarily lowered tax rates before relief was cut on 30 June.

The figure for July was, however, still 4.2% higher than the sales figures for the same month in 2020.

HMRC also noted there was a spike in sales in March ahead of the original deadline for the stamp duty cut, before the government pushed it back to June. 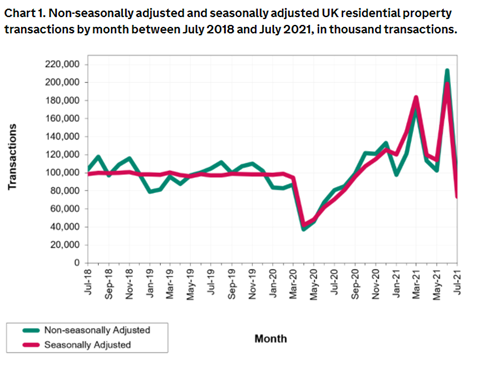 The figures are the latest in a series of data revealing a slump after the stamp duty cut deadline. Figures from Rightmove published last week showed house prices fell month-on-month in July for the first time this year.

Despite the month-on-month slump, HMRC is estimating there will be 506,000 residential transactions in the 2021/22 financial year, which would be the highest figure since at least 2012. It says this is due to “having captured impacts from temporarily increased nil rate bands for stamp duty land tax and land transaction tax.”