Developer Godwin has secured its second major planning approval in as many days with councillors in Nottingham resolving to grant plans for a 692-bed student scheme on the site of a former Royal Mail sorting office.

The decision to approve the Bendigo Building on the disused Bath Street site follows the decision by councillors in Sheffield to give the green light to Godwin Developments’ 336-home Meridian build to rent development. 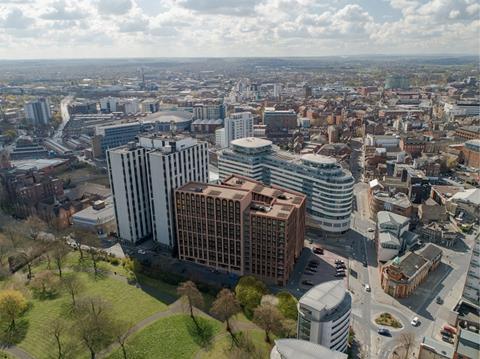 Nottingham City Council approved the Bendigo scheme, which will provide the student beds in a series of buildings rising to as much as 15 storeys, subject to agreeing further design details.

The two decisions mean the firm has now gained approval for more than 1,000 homes in recent days. Godwin said the Bendigo Building, which will consist of a mix of studio apartments and four to six bedroom clusters, will bring £234m of economic activity to Nottingham.

Matt Chandler, development director at Godwin, said he was “delighted” to have secured planning approval for the proposals, which he said will “transform this eye-sore of a building into a thriving student hub.”

“Our plans will support the Council’s ambitions to keep the city centre vibrant, house students better, and protect further traditional family housing from being converted for student occupation.”