More than a hundred firefighters are fighting a blaze at a 19-storey residential block in East London built by Ballymore which is clad in Grenfell-style ACM.

The London Fire Brigade said there were 20 fire engines and around 125 firefighters at the scene of the fire at the 1,535-home New Providence Wharf development in Poplar.

Footage posted on social media showed parts of the eighth, ninth, and 10th floors on fire, with firefighters attempting to douse the flames from ladders. The London Fire Brigade said in a statement on Twitter issued just after 9am this morning that: “Firefighters are tackling a fire at a 19-storey block of flats in #Poplar Parts of the 8th, 9th and 10th floors are alight. There are now 20 fire engines at the scene”. 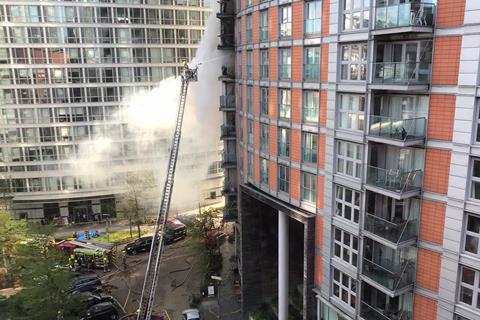 There have been no reports so far of any casualties.

Developer Ballymore said just after midday that the fire had been “quickly brought under control” and was now “extinguished”.

The block made headlines in January after it emerged that its ACM style cladding had still not been removed three and a half years after the Grenfell Tower fire which claimed 72 lives in June 2017.

🚨 20 fire engines on the scene of a fire at New Providence Wharf in East London this morning.

The building’s still covered in ACM cladding - the same type as was on Grenfell. Awaiting updates. @LBC pic.twitter.com/vvKaNzxTUW

Ballymore subsidiary Landor Residential, which is understood to own the building, was one of 14 firms ‘named and shamed’ by the government in January for having failed to begin removing the cladding on their developments.

More recently the firm has been removed from the list.

Ballymore was quoted in January as saying that work to remove the cladding was “complicated” as the building faces directly onto the river and its apartments house more than 1,000 residents.

Firefighters are tackling a fire at a 19-storey block of flats in #Poplar Parts of the 8th, 9th and 10th floors are alight. There are now 20 fire engines at the scene © @ATLondon2 https://t.co/XsbfJEXQqm pic.twitter.com/228AyjNzxf

Enabling works for the project are understood to have commenced last week, with the main contractor due to take possession of the site on Monday.

In a statement issued just after midday Ballymore said: “Our thoughts are with everyone who has been affected by this morning’s fire at New Providence Wharf. The safety of our residents is paramount and we are working closely with the London Fire Brigade. 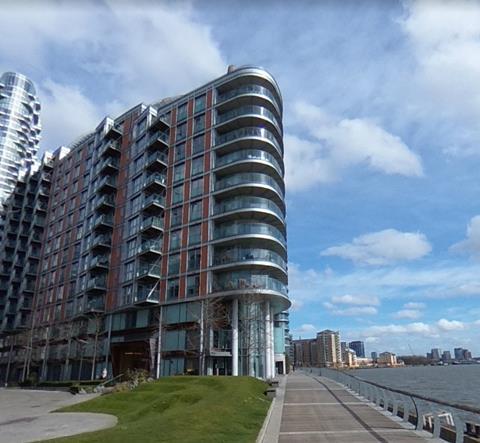 “We can confirm that the fire was quickly brought under control by the Fire Brigade and is now extinguished. Our response team are on-site to support residents and assist with alternative accommodation where necessary.”

The firm said that around 22% of the building’s facade comprised ACM panels, similar to those used on Grenfell Tower.