Moda Living increased its annual turnover by 36% year-on-year and boosted its operating profit as it continues to secure deals to build out sites as part of a wider plan to deliver 7,500 build to rent homes.

The developer, in annual results released late last week, reported turnover of £120m for the year ending 31 March 2020, up from £88.3m the previous year. However, the company’s pre-tax profit decreased 37% to £3.2m, but this was due to a one-off £2m disposal of investment that inflated profit in 2018/19.

Moda’s operating profit increased over the same period from £3.19m to £3.56m. 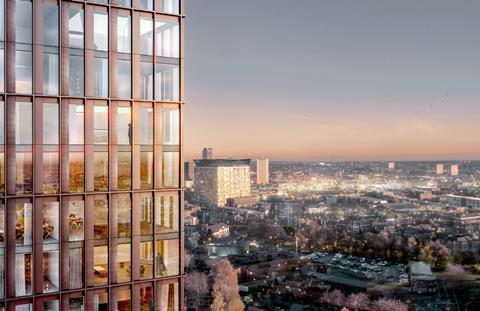 A Moda development in Birmingham

Moda Living, which is joint owned by Caddick Developments and Generate Land, and is backed by Apache Capital Partners, said it has now secured nine sites with a total Gross Development Value of £1.3bn comprising 4,400 units.

It said it is continuing to look for more Build to Rent sites to make up the planned 7,500 homes and is “well-placed for the  future”, completing its 458-home Angel Gardens tower block in Manchester last August.

Construction of further blocks in Liverpool, Birmingham, Leeds and Edinburgh, which will deliver a total of 1,658 homes, are expected to complete between late 2021 and the end of 2022. The properties are being built under joint venture agreements.

A further 433-home development in Glasgow is expected to complete in 2023.

The company accounts also revealed the firm temporarily reduced pay for all staff in the wake of the onset of the covid-19 pandemic.