The former managing director of the Building Research Establishment (BRE) has denied reaching an agreement with a senior government official to withhold key details about the cladding on Grenfell tower in the days after the fire.

Debbie Smith told Thursday’s hearing of the Grenfell Inquiry that it “didn’t occur at the time” to mention that the aluminium composite material (ACM) panels used on the tower had catastrophically failed a BRE fire test 16 years previously.

By this time it was known that ACM panels had been installed as part of the tower’s cladding system. 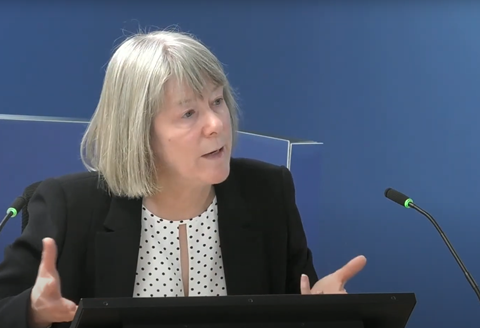 The inquiry has already heard that a series of tests on ACM in 2001, commissioned by the government and carried out by the BRE, had resulted in a “catastrophic” escalation of fire with the rig having to be extinguished five minutes into the 30-minute test after flames reached 65ft in height.

But Smith did not mention the tests in the meeting, and did also not mention that she had known that ACM was being widely used on tall buildings prior to a 2006 revision of building regulations that restricted its use.

Counsel to the inquiry Richard Millett AC asked: “During this discussion or at any other time during this meeting, did you tell the minister or anybody else present that you yourself might have a very good idea as to the exact reasons for the speed of the spread of the fire, namely what the BRE had witnessed in the 2001… tests?”

Smith replied: “No, because that would not have been appropriate at that time, because an investigation was ongoing, and it would have been pure speculation, really.”

Millett said: “No, it wouldn’t, Dr Smith. It wouldn’t have been speculation. It was a fact, and it was a material fact, highly material to the very issue of the exact reasons for the speed of the spread of fire.

“The BRE had conducted an experiment on [ACM] cladding and it had failed spectacularly. Why not tell the minister that that had happened and that the government had the records of that?”

Smith said that it “didn’t occur at the time”, adding that the cladding system tested in 2001 was different to the one used on Grenfell tower and the results would not have been representative of the causes of the 2017 fire.

One of the aims of the meeting was to ascertain whether Grenfell tower was a one-off or if there were other buildings in the UK fitted with similar combustible materials.

But Smith admitted that she did not tell Sharma - who had been in his ministerial post for less than a week - that ACM had been permitted in high-rise buildings up to the 2006 revisions to building regulations because it could achieve the British fire rating of ‘Class 0’.

Millett said: “Was it not relevant exactly in answer to the question for the minister to know that up until 2006 there was at the very least a real possibility of a legacy of buildings which had ACM with a polyethylene core on them, because the regulations at that stage permitted them?”

Smith replied: “Okay, but, I mean, what was being discussed was about finding facts and about knowing exactly the numbers and where they were.”

“It would have been a direct answer to a direct question: is Grenfell a one-off? Why didn’t you say it can’t have been a one-off because the regulations were only tightened up in 2006 to ban all combustible materials from the external wall?”, Millett asked.

“Okay, well, again, it’s not something that occurred to me at the time, given the nature of the discussions that were going on in that meeting,” Smith said.

The BRE had also been warned in 2014 that ACM was still being widely used on high-rise buildings despite the 2006 revisions to building regulations because the text of the guidance was being misunderstood by many in the industry.

> Also read: Government may have understood 20 years ago Grenfell-style cladding was not suitable for high-rises, BRE says

The day before the meeting with Sharma, Smith had been travelling back to London from France on the Eurostar when she was emailed by Brian Martin, the senior civil servant responsible for fire safety regulations in buildings.

Smith sent Martin a message asking if she could call him. She told Millett that she could not remember if she had talked to the civil servant or what they had discussed if the call had taken place.

Millett asked: “Did you reach an agreement with Brian Martin before this meeting that you would speak only when spoken to and give away the barest minimum of information to the minister?”

“Did you reach an agreement with him that you wouldn’t mention the 2001 tests?” Millett asked.

“Did you reach an agreement with him that you wouldn’t tell the minister about the debate that had raged at least, as we’ve seen, since July 2014 about the scope and ambit of [building regulations on combustible cladding]?”

“No, absolutely not,” Smith replied.

Earlier in the day, Martin had approached the BRE asking for an “independent expert” to rebut a story in The Times which claimed that dangerous cladding had been compliant with official guidance.

Martin, who had sent an identical email to building control body the National House Building Council, had then informed Smith that he had “agreed with the Met Police” that the expert could not be from BRE.

Asked why this agreement had been made, Smith said she did not know for certain, adding that she thought the BRE was being approached by the Met to assist in the investigation into the Grenfell fire.