Urban & Civic delisted from the stock exchange on Thursday

Urban & Civic agreed to the buyout in November last year after accepting a bid from the charity, with the two firms recommending shareholders back the offer of 345p per share in the business. 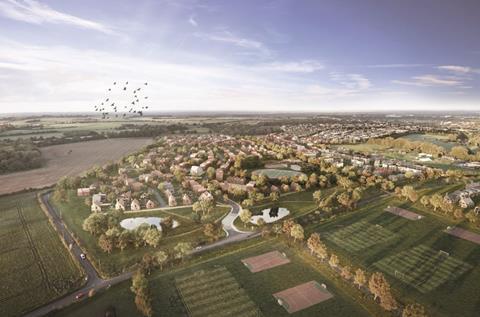 The two firms agreed to collaborate on the £1.2bn Manydown development in Hampshire last year

The developer’s share price had immediately rocketed by 65% following the agreement.

The acquisition appears to have been borne out of the collaboration between the two firms on the £1.2bn garden community development of Manydown in Hampshire (pictured), which received outline planning permission in July last year.

The organisations announced the formation of a joint venture between them and the local authorities in the area shortly afterwards.

Urban & Civic was set up by former Chelsfield boss Nigel Hugill alongside Robin Butler in 2009 to become a “master developer” of large strategic housing sites, such as Waterbeach Barracks in Cambridgeshire.

It now has 10 strategic housing sites under ownership, of which it is building out six already via partnerships with other developers and housebuilders, with 33,500 consented homes.

The Wellcome Trust said in November that it did not intend to alter its strategy and will retain its current management, adding: “Wellcome intends that the Urban&Civic Group will continue to pursue its existing pipeline of development opportunities and continue to invest in new opportunities as they arise.”

The Wellcome Trust controls a £26.8bn investment portfolio designed to maximise income for the charitable purposes of the foundation, which is focused on improving public health.