Urban Splash’s modular housing business has agreed in principle a £130m funding injection from its Japanese investor, Sekisui House, after the modular business had to secure waivers from its lenders for breaches of loan covenants.

The revelation is contained in accounts for year to September 30 for Urban Splash’s modular housing business, which show the business fell to a £12.7m loss on revenue of £10.7m.

The business was formed initially from the purchase by Manchester-based Urban Splash of SIG’s modular housing operation in 2018, before being spun out as a separate operation in joint venture with Japanese housebuilder Sekisui in May 2019 as part of a £90m deal that included backing from Homes England. 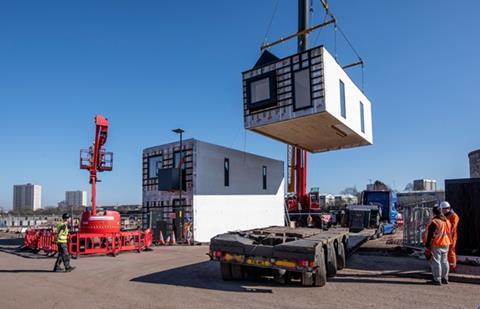 The firm, Urban Splash House Holdings Ltd, said in its accounts that subsequent to the year end it had negotiated a memorandum of understanding with Sekisui to provide a £130m funding package through a “combination of financial instruments”, with an initial £7.5m loan provided, of which £4m was already drawn down as of September this year.

However, the accounts also said the business had been “adversely impacted by uncertainty and disruption caused by Covid-19”, resulting in its modular factory shutting down for two months.

In a going concern statement, the accounts said that at the last September year-end the business was in breach of one of its loan covenants, which had been waived prior to the year end. That waiver was then subsequently extended after the year end, while two more waivers were secured for two further covenant breaches.

The group is now forecasting that it will hit one of these covenant targets in the short term, and said it remained in discussion with lenders over the remaining breaches. However, it said that given current funding and the MOU for further funding, “the business is able to continue to operate within its committed facilities” and it was therefore confident of it continuing as a going concern for the “foreseeable future”.

The business saw turnover rise nearly threefold, from £3.8m in the 10 months to September 2019, to £10.7m in the year to September 2020, with the group recording its first direct sales to customers in the Piercy Street scheme in Manchester.

However, the firm’s losses expanded at a similar rate, with the business recording a pre-tax loss of £12.7m, up 209% from the £4.1m loss recorded in the prior period.

The modular joint venture with Sekisui is separate from the wider Urban Splash Group, which last month reported a profit of £0.9m on turnover of £39.4m.

Writing in the foreword to the accounts, Urban Splash House Holdings chair Claire Kober said the results reflected the “impact of Covid-19”, as well as the “start-up nature of the business”. However, she said the business retained net assets of £44.7m, cash reserves of £5m and undrawn debt facilities totalling £18.1m.

She added: “I am also pleased to report we have agreed a significant funding package with Sekisui House which will support the businesses [sic] growth strategy and reflects our partner’s confidence in both the UK market and our business.”