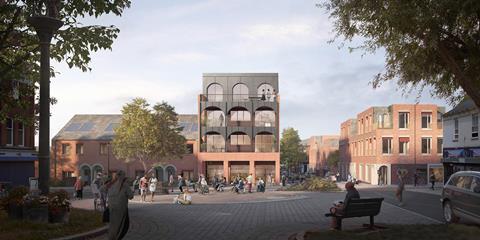 Love Wolverton proposals for The Square. See next picture for the scene today

Developer Town has submitted plans for the £28m transformation of a failed 1970s shopping complex into a residential neighbourhood in Milton Keynes.

The high-density low-rise plans, drawn up by architects Mikhail Riches, Mole Architects and Urbed, will provide 115 homes, small shops and community spaces laid out around new and reinstated streets – many of them car-free – on a 13ha brownfield site in the centre of Wolverton.

Town director Neil Murphy said 86 of the homes would now be built to rent in a response to delays caused by the pandemic. A PRS delivery model would accelerate construction, he said. The homes will be a mix of one- and two-bed flats and two- to four-bed houses, just under a third of them to be let at a discount.

A co-housing community for the over-50s will also be incorporated, with shared facilities and 25 flats for market sale and four for social rent, co-designed with Still Green Cohousing.

The Love Wolverton scheme has been designed as six blocks of two to four storeys laid out in a grid of streets designed on Dutch low-traffic home-zone principles to be “green, sociable and play-friendly”.

David Mikhail of Stirling Prize-winner Mikhail Riches said the red-brick architecture was designed to capture the “pioneering Victorian spirit” of the old railway town, while the layout is intended to knit the site back into a walkable street grid.

This was ruptured when the Agora Centre and its car park were built in the late 1970s by the Milton Keynes Development Corporation. Wolverton is 4km north-west of central Milton Keynes. 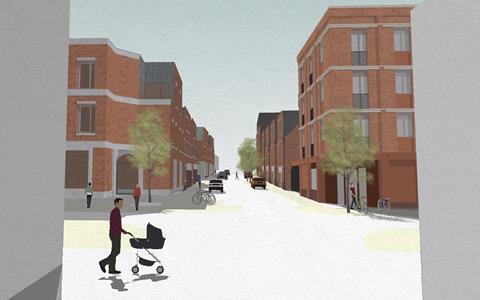 The proposal for a revived Radcliffe Street

“Its construction led to the separating of the two main town centre shopping areas and created a visual barrier and as a result completely altered the character of the heart of the town,” said Murphy.

Never financially viable, it struggled for years and was acquired vacant in March last year. A listing attempt failed and conservation area consent for demolition of the building with its 60 units was granted a year ago. 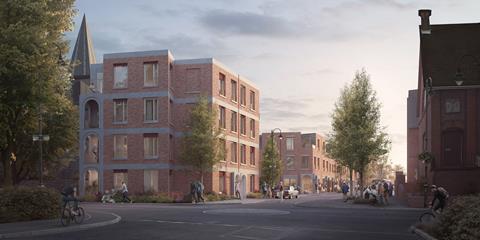 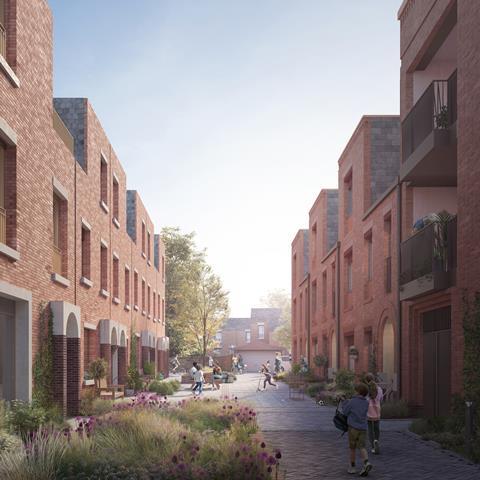 A renewable energy microgrid is intended to generate clean energy and reduce the scheme’s carbon emissions. In line with Milton Keynes’ climate emergency policies, the whole project is aiming to reduce calculated carbon emissions by 80% compared with Building Regulations.

David Rudlin, director of Urbed, said the scheme had the potential to be an exemplar for others.

Murphy added: “The last few months have shone a spotlight on how uncomfortable many homes are to spend a lot of time in and how much worse living conditions often are for renters. Town’s first rental development will pioneer a more community-oriented rent model: generous houses and apartments – 7% bigger on average than national space standards – with plenty of private and communal outside space, accessible to people on a wider range of incomes than if they were for sale.”

The proposals are expected to be brought to planning committee in the spring. If approved, work would begin in the middle of the year and take up to two years.

Murphy said they were already talking to contractors with a view to having a negotiated agreement in place in the first quarter of 2021.