A partnership regenerating brownfield land around Cambridge North Station has put in plans for 425 new homes along with life sciences and tech labs and offices. 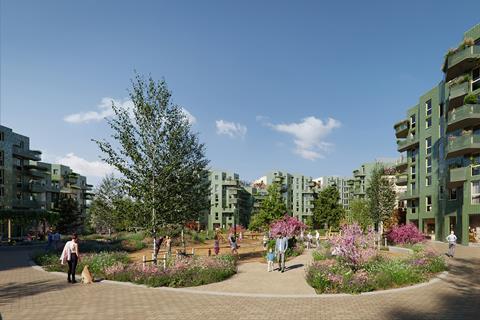 The Chesterton Partnership has submitted the proposals to South Cambridgeshire District Council for the next phase of a mixed-use development on the site of a former railway sidings.

Sven Topel, chief executive at Brookgate, which is the developer in the partnership, said:  “The next phase of the regeneration of the derelict land surrounding the new Cambridge North railway station will create a new community that will be enjoyed by those that live and work there but also by its neighbours and those that visit.”

The other two firms in the partnership are Network Rail and freight company DB Cargo. This phase of the scheme has been designed by architecture practices Acme and Make. Homes in the scheme will be a mix of tenures, including shared ownership and affordable rent. Forty per cent of 155 homes for private sale will be designated as affordable housing.

This phase is expected to support 4,300 jobs when it is completed and create 2,020 construction roles during the five-year construction period. Plans for the scheme have been submitted following several years of conversations, workshops and consultations with stakeholders, community groups and the local authorities.