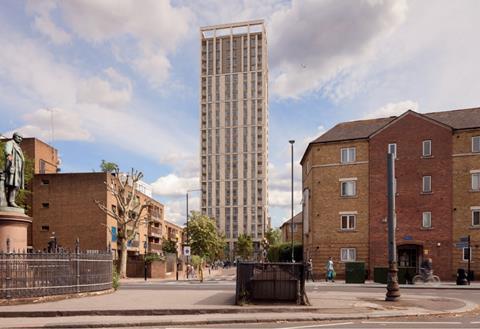 The scheme will include more than 270 homes

Plans by by Muse Developments and housing provider Poplar Harca for a 25-storey residential tower in Bromley-by-Bow close to the Olympic Park have been given the green light.

Tower Hamlets council gave the go-ahead earlier this month for the proposals designed by architect RMA, which will see existing buildings on the 1ha Stroudley Walk site demolished and replaced with a total of four new buildings providing 274 homes, 51% of which will be affordable.

A previous outline approval for a 130-home scheme on the site which included a 16-storey tower was granted in March 2015 but lapsed, allowing a new application to be lodged.

Muse and Poplar Harca entered a development agreement in 2017 for the new scheme.

The pair have previously built the Rathbone Market scheme in Canning Town, Lock 17 in Tottenham Hale and Wapping Wharf in Bristol.

RMA has previously worked with Poplar Harca on Poplar Dock in Tower Hamlets, Blockhouse Point in Waltham Forest, Greenland Place in Lewisham and The Forge in Newham.

Stroudley Walk is the site where Sylvia Pankhurst, daughter of suffragette Emmeline Pankhurst, made her first speech in 1913 as part of a campaign to improve the conditions of women living in the East End.

Mahatma Ghandi also stayed in the nearby Kingsley Hall in 1931 for 12 weeks while attending the Imperial Conference on the future of British-occupied India.