The firm which manufactured the flammable insulation installed on Grenfell Tower “took advantage” of the confusion of a key building control body to obtain a fire safety certificate stating that its product was safe for use on high rise buildings.

Former product manager at Celotex Jonathan Roper admitted yesterday that he had not corrected a misunderstanding about building regulations by Local Authority Building Control (LABC) technical sales director David Ewing because it was “viewed as advantageous not to”. 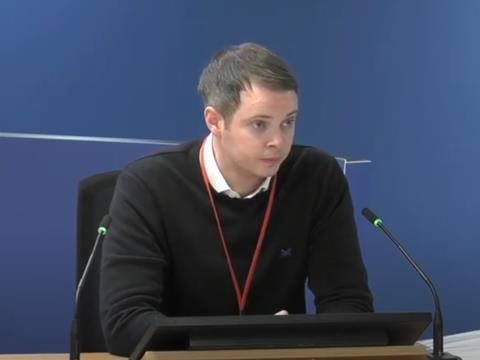 The inquiry heard how Ewing had appeared to confuse the ‘class 0’ fire rating for building materials with the concept of limited combustibility when Roper asked how Celotex’s chief rival, Kingspan, had been awarded an LABC certificate for its K15 insulation.

Ewing had replied that because K15, then widely used on buildings above 18m in height, was described as ‘class 0’, “it can be termed a material of limited combustibility”, adding: “It is suitable for use within the wall construction even at heights above 18m.”

The two ratings are in fact separate, with many ’class 0’ products unable to pass as limited combustibility.

Celotex’s RS5000 insulation, later used on Grenfell Tower’s flawed refurbishment, had achieved a ‘class 0’ rating but was not a material of limited combustibility.

Inquiry barrister Richard Millett QC asked Roper if he thought that he “might be able to get an LABC certificate for use above 18 metres simply based on the fact that it had class 0?”

Roper replied: “Yeah, I think Celotex’s view was that they wanted a registered detail to replicate exactly what K15 had.”

Asked by Millett if this was to “take advantage of LABC’s apparent ignorance”, Roper replied: “It seems that way, yes.”

Suggested wording for the certificate was then emailed by Roper to the LABC which Millett said appeared to have been copy and pasted directly into the final certificate, even including a typo in Roper’s email.

Roper said that he did not know how his wording, which included spaces before and after a pair of brackets, came to be included verbatim in the LABC’s formal document but admitted that the certificate was “untrue and misleading” and agreed with Millett’s suggestion that Celotex had “intended that to be the case as a way of avoiding being challenged by building control officers down the track”.

The certificate was later sent by Celotex in August 2014 to Harley, the cladding subcontractor which purchased the insulation for use in Grenfell Tower’s refurbishment.

Roper also told the inquiry how he had assisted Celotex in manipulating technical drawings of the cladding system in which RS5000 was tested to make it appear as if gaps between the panels were larger.

In the actual May 2014 BS8414 test, which RS5000 had passed with the aid of added components not included in the product’s marketing material, the gaps between the panels had been smaller to reduce the ability of flames to reach into the insulation.

Roper admitted that he had asked for the test rig to be constructed with very small ventilation gaps because it was Celotex’s intention to “overengineer the rig so that it passed”.

Celotex admitted in its opening submission to the inquiry that there were “certain discrepancies” between RS5000’s successful May 2014 BS8414 test, which is needed to certify it as safe for use on high rise buildings, and the description of that test in the BRE’s test and classification reports.

Celotex also said that none of the key employees involved in the testing development and marketing of RS5000 remain employed by the firm.

The second module of the inquiry is focusing on the role of the refurbishment’s materials in the 2017 fire at Grenfell Tower, which killed 72 people.