A director at the management organisation responsible for Grenfell Tower attended meetings that covered lessons to be learned from a fatal 2009 fire in Southwark but never discussed related combustible cladding issues that were relevant to his own project, the Grenfell Tower Inquiry has heard. 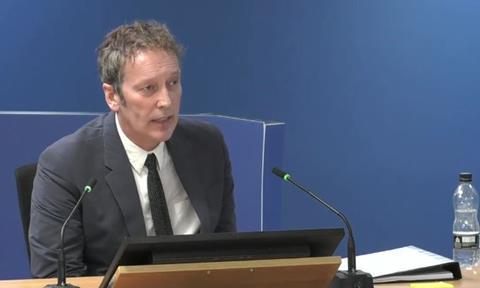 In his first day of evidence to the inquiry into the 2017 fire, which claimed 72 lives, Maddison was asked about his attendance at two KCTMO-organised health and safety meetings that discussed lessons to be learned from the Lakanal House fire in Southwark. Six people died in the 2009 fire at the late 1950s council-owned slab block.

Maddison confirmed he had been present at the sessions. One took place just three months before the Grenfell fire and covered Southwark council’s prosecution for breaches of the Regulatory Reform (Fire Safety) Order following the Lakanal fire.

One of the issues at Lakanal was the introduction of new cladding that was not fire retardant as part of a £3.5m refurbishment programme.

The coroner overseeing inquests on the victims also used her powers under Rule 43 of the Coroners Rules to call on the government to consider requiring sprinklers to be retrofitted to high-rise residential buildings. She also called on ministers to review Part B4 of Approved Document B of the Building Regulations to bring greater clarity to advice on work that could reduce the safety of buildings.

Grenfell Inquiry lead counsel Richard Millett QC read from the minutes of the 16 March 2017 meeting, which confirmed that the Lakanal House paper was discussed. “It was noted we were compliant with the offences for which Southwark was prosecuted,” he read.

Millett asked Maddison if he remembered to what extent the meeting had reviewed KCTMO’s own systems and arrangements for complying with the relevant obligations under the RRO order in light of Southwark’s prosecution. “I’m afraid I don’t,” he said

Millett asked Maddison if he knew the basis for the note confirming that KCTMO was “compliant” with regulations that Southwark was prosecuted for breaching.

“I’m sorry, I don’t,” he replied. Maddison added that he did not know who would have been responsible for the note.

Millett asked Maddison if he had drawn any connection between Lakanal House and the Grenfell Tower refurbishment project, which had reached practical completion in the summer of 2016. Maddison replied: “No.”

Millett asked Maddison if he had any recollection of the question of the combustibility of the cladding being used on Grenfell Tower being discussed with him, in particular in the context of the Lakanal House fire. “No, not specifically,” he said.

In their evidence to the inquiry Maddison’s junior colleagues at KCTMO Claire Williams and David Gibson both claimed to have had Lakanal House-inspired conversations about the safety of the Grenfell cladding and insulation with refurbishment main contractor Rydon.

Neither explicitly said they had such conversations with Maddison, however.

Millett also asked Maddison what conversations the Lakanal House coroner’s recommendations on retrofitting sprinklers in high-rise buildings had prompted within KCTMO when they were made in 2013.

Maddison said part of the work he started at the TMO when he arrived in early 2013 was putting an asset-management strategy in place to set parameters for investing in housing stock.

“We were in dialogue with the council about the level of investment needed and what the priorities were,” he said.

“At that time, we were looking at ensuring the passive elements of fire safety were in operation. Particularly on Grenfell the [automatic opening vent] there was beyond economic repair, so the priority was to make sure that what was there was put back in working order.

“There wasn’t consideration, as I can remember, in relation to fitting sprinklers.”

Earlier in the afternoon, Millett asked Maddison whether he was satisfied that due diligence had been carried out in the appointment of each of the contractors and consultants the TMO engaged on the Grenfell Tower refurbishment.

“I was only involved with the due diligence in relation to the main contractor,” Madison replied – referring to Rydon.

He added: “I didn’t have sight of what due diligence was carried out in relation to the consultants.”

Millett asked what research Maddison did on the consultants who were already engaged on the project when he joined the TMO, in particular project architect Studio E.

Maddison said the project was already at RIBA Stage D when he joined KCTMO, but that it had stalled.

“The only work that was carried out at that stage was to take the project from Stage D to Stage E, so it was quite a limited amount of work,” he said.

“I didn’t have any cause … I took at face value that the due diligence had been carried out before I arrived.”

Maddison said in his written evidence to the inquiry that KCTMO and its parent organisation the Royal Borough of Kensington and Chelsea had appointed Studio E and cost consultant Artelia to the Grenfell Tower refurb. Both had been working on RBKC’s neighbouring £40m Kensington Academy and Leisure Centre (KALC) project.

Millett asked Maddison if he had been aware that Studio E had been appointed to KALC because of their specialist skills with schools and leisure centres and had no experience of high-rise residential projects such as Grenfell.

“My experience with Studio E was that they were delivering a complex and large programme right next to Grenfell Tower and it was overclad,” he said.

“So I’d expect that they would have had a degree of understanding of the complexity of that sort of project.”

Monday’s Grenfell Tower Inquiry hearing was told that Maddison had made the surprise late submission of a host of new evidence to the probe on Friday after viewing the evidence sessions of former colleagues Williams and Gibson. 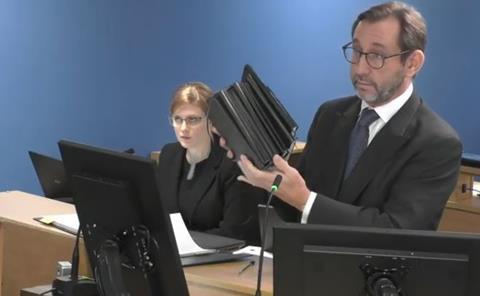 The barrister said that both Maddison and TMO legal adviser Kennedys were “going to have to give clear and convincing explanations of why these documents were not disclosed to the inquiry – and so far as we can tell to the Metropolitan Police – until now”.

On Wednesday, Millett told Maddison that he would not be questioned on why the documents were not produced until the end of his evidence – likely to be early next week. He may still be questioned about information within the documents before that, however.

Millett said Maddison was receiving separate legal advice in relation to the disclosure of the notebooks and diaries and his new representative would need time to get up to speed before the issue was formally probed.