The Court of Appeal will rule next week on a legal challenge aimed at quashing the government’s expansion of permitted development (PD) rights to create new homes, which was pushed through in the wake of the pandemic lockdown during the summer.

The court has scheduled October 5 to consider an appeal by environmental campaign group Rights: Community: Action (RCA) of last November’s High Court dismissal of its claim that new development rights were not properly considered or consulted on before being brought in.

In August the housing ministry - now the Department for Levelling Up, Housing and Communities (DLUHC) - introduced new PD rights via statutory instrument. These allowed developers to demolish and rebuild properties as homes, to build new homes above existing homes and offices, and removed a raft of previously existing planning use classes.

The moves, which were billed as part of the government’s response to the economic crisis brought on by the covid-19 pandemic, were bitterly opposed by many planners and came despite evidence of the poor quality of homes built under existing PD rights.

The changes were also introduced without a further consultation that the government had promised when the majority of respondents to an earlier consultation on the same proposal were opposed to the plans.

Naomi Luhde-Thompson, director at RCA, said that if the challenge was successful it would result in the PD rights being quashed. “We think this is really significant case,” she added. “It’s about defending the extent of protection provided by environmental protection laws in England.” 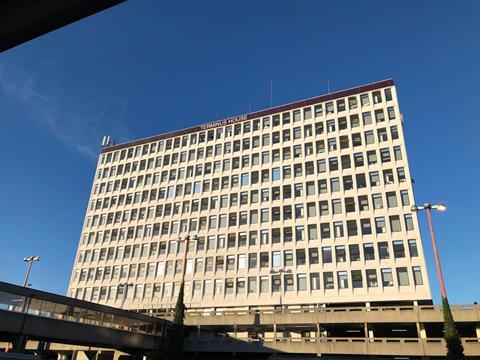 The new PD rights were last year described as “disgraceful” by the RIBA, given concerns over the quality of new homes approved under the process, such as Terminus House in Harlow (pictured, right). Last July the government received a rare joint rebuke over the changes from the professional institutions governing much of construction and development – the RIBA, the Royal Town Planning Institute, the Chartered Institute of Building and the RICS.

The government’s Building Better Building Beautiful Commission last year said the existing expanded use of PD had inadvertently permitted “future slums”, while the government’s own assessment of the quality of homes produced by PD said they created worse homes “in relation to a number of factors widely linked to the health, wellbeing and quality of life of future occupiers”.

However, last November, High Court judges Lord Justice Lewis and Justice Holgate ruled against RCA’s challenge on all three grounds raised by the charity. However, they conceded that the first of RCA’s grounds – whether the government should have carried out a strategic environmental assessment (SEA) before bringing in the new statutory instruments – was arguable and granted RCA leave to appeal.

RCA’s grounds of appeal document alleges that the High Court “erred in concluding that the three statutory instruments were not required to be subject to strategic environmental assessment”.

The High Court judgment found the statutory instruments did not “set the framework for future development consent of projects”, and therefore could not be subject to an SEA under existing law. However, RCA is set to argue that this judgment relies on an “unduly narrow construction of the term “development consent”.”

Official figures show the government’s prior expansion of PD rights, introduced in 2014, had produced almost 73,000 new homes up to March 2020.

A spokesperson for DLUHC said: “We are aware of the legal proceedings. We do not comment about ongoing litigation.”