Developer and contractor Morgan Sindall has secured funding allowing construction to start on the 520-home first phase of its New Victoria scheme next to the Manchester rail terminus. 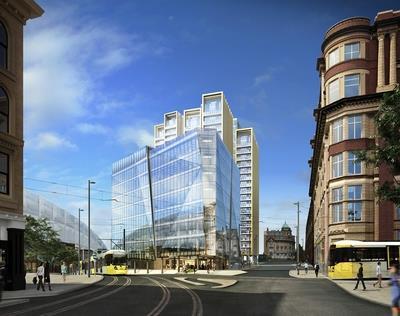 The £185m scheme, being developed in partnership with landowner Network Rail and with support from Manchester City Council and Homes England, will deliver 450,000 sq ft of residential development, including 178 one-bed, 286 two-bed and 56 three-bed apartments on the site.

Morgan Sindall said its regeneration division, Muse, had secured “forward funding” for the scheme allowing it to press ahead with the build, while at the same time developing proposals for the second phase of the wider New Victoria scheme which will include a 150,000 sq ft Grade A eight-storey office building.

Construction of the first phase is now scheduled to complete in 2023. Muse first submitted plans for the site in May 2016.

“We look forward to working with our partners to deliver a transformational scheme on an underutilised site in the heart of Manchester’s city centre”.