Architect Wilkinson Eyre has released images of the view from the top of one of the rebuilt chimneys at Battersea Power Station which will open to visitors next year.

The architect, which is working with fellow architect Purcell on the refurbishment and conversion of the grade II*-listed structure for the Battersea Power Station Development Company, has designed a glass lift that will travel up inside the north-west chimney.

Carrying up to 30 passengers, it will emerge 109m later from the top of the 50m-tall chimney to reveal 360-degree views across London.

The attraction is designed to be a key draw for visitors to the £9bn residential-led mixed use development of the site, set to deliver almost 3,500 homes on the south bank of the Thames.

Called Chimney Lift, and operated by entertainment company IMG, the glass lift will be open to the public as well as for private events, with the experience beginning with an exhibition on the Power Station’s history in turbine hall A.

Built by Otis, the lift will open to the public in spring 2022, the same time as the power station reopens.

All four chimneys were demolished and rebuilt about five years ago at a cost of £48m because they were judged to be unsafe. There were concerns that if all the chimneys were demolished at once they might never be rebuilt, paving the way for the rest of what was once Europe’s biggest brick building to be bulldozed. To protect against this the developer paid an £11m bond to Wandsworth council and was only allowed to demolish the final three after the first rebuilt chimney had passed the halfway mark. 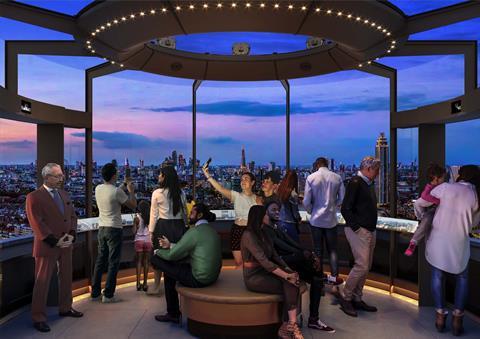 Battersea Power Station Development Company’s head of leasing, Sam Cotton, hailed news of the lift, saying: “This year is going to be the most exciting yet in the transformation of Battersea Power Station with our first residents moving into their homes this spring, the Northern Line Extension opening in the autumn and our retailer and office occupiers starting to fit out their spaces ahead of opening the power station’s doors to the public next year.”

The site, masterplanned by Rafael Vinoly, also contains significant development either side of the power station. The flats and shops of Circus West Village, designed by Simpson Haugh and dRMM, opened some years ago and are home to 1,500 residents.

Construction on the other side, including flats by Frank Gehry and Foster & Partners and a public space designed by Bjarke Ingels’ practice BIG – named Malaysia Square after the site’s owners – is well under way.

The power station has been derelict for decades and was the subject of several aborted proposals before being bought by a Malaysian consortium in 2012 for £400m. The £1.15bn redevelopment scheme was originally set to complete in 2019 although this was then bumped to 2020.