Developers tell Gove others must contribute to £4bn cladding levy

Developers have told Michael Gove that the cost of repairing mid-rise blocks of flats affected by the fire safety crisis must be shared with government and the wider construction industry.

The statement from the Home Builders’ Federation came after the first of a series of crunch meetings between the housebuilders and the housing secretary since Gove’s decision last week to force them to contribute £4bn to pay for remediation work.

The statement from HBF executive chairman Stewart Baseley appears to represent a hardening of the group’s line towards the new policy, which Gove launched last week after he scrapped a plan by his predecessor, Robert Jenrick, to force leaseholders to pay for the cost of fire safety repairs in blocks of between 11-18m. 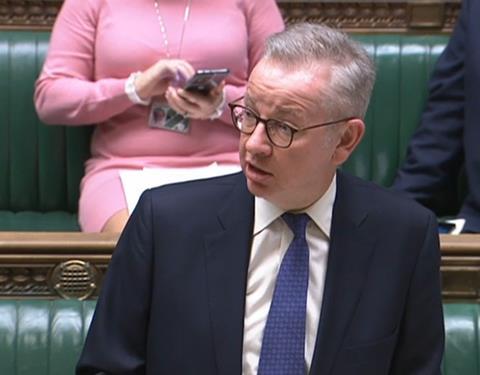 Gove said last week all housebuilders with profits of more than £10m should contribute to the £4bn cost of repairs, and threatened to bring in a new tax if housebuilders did not agree a plan to contribute voluntarily by Easter.

Gove met with the HBF and representatives from the top 20 housebuilders at lunchtime yesterday, at which he reiterated his expectation that the industry will cover the cost of repairs, adding that “nothing was off the table”, according to a levelling up department spokesperson.

After the meeting Baseley said the housebuilders supported the government’s decision to protect leaseholders from the cost of fire safety repairs, and said the industry would engage “constructively” with government over Gove’s plan.

The government has already levied a £2bn Residential Property Developer Tax to part pay for the cost of repairs to buildings over 18m.

Baseley said the largest builders had built a “minority” of the affected buildings and had at any rate already contributed £1bn directly to repairs.

He said any further contributions made by developers “must be proportionate, take into account the significant commitments made by industry so far and involve other companies, sectors and organisations who are outside the scope of the Residential Property Developers Tax.

>> In case you missed it: Michael Gove’s building safety speech in full

“We do not believe it should fall to responsible UK housebuilders to fund the remediation of buildings built by foreign companies, developers no longer trading or other parties.

“We are also keen to see the discussions widened out to include other bodies, not least freeholders and the materials providers who designed, tested and sold materials that developers purchased in good faith.”

Baseley added that specifications for all the buildings in need of remediation would have been drawn up by housebuilder in accordance with Building Regulations set by Government at the time of construction.

The comments come after Gove said last week he was “going after” developers over the cost of cladding repairs.

A Department for Levelling Up, Housing and Communities spokesperson said: “The Secretary of State set out the government’s expectations for industry to cover the costs of fixing unsafe buildings and he reiterated that nothing was off the table.

“Today’s roundtable was attended by senior executives from the country’s biggest developers, and these representatives agreed leaseholders should not pay.

“We continue to engage with them to ensure they deliver a fully funded action plan by early March.”