The development arm of major housing association Clarion Housing Group has acquired a brownfield site in Manchester city centre for a residential development.

Latimer plans to build 442 flats on part of the former Boddington’s Brewery site, on Great Ducie Street near Victoria station. 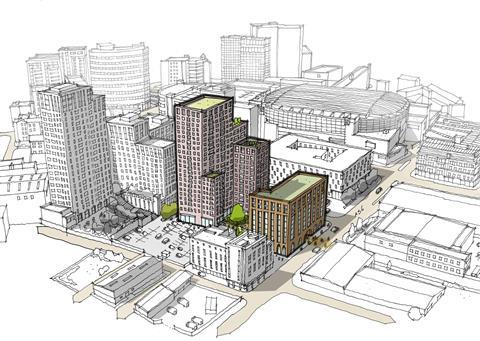 How the new Clarion development will look

The proposed scheme will feature a mix of one, two and three-bedroom flats of which 60% will be affordable housing, including social rent, affordable rent and shared ownership.

The site was acquired from LTE Group, a training, education and skills enterprise which is building City Campus Manchester, a new educational facility for the Manchester College and higher education organisation UCEN, on the site adjacent.

Richard Cook, group director of development for Clarion Housing Group, said: “Our scheme is part of a masterplan that will see the delivery of new high-quality homes in close proximity to all that the city has to offer, from bars and restaurants to local employment opportunities.”

Clarion is one of the United Kingdom’s largest housing associations, with a turnover for the half year ending 30 September 2020 of £432m and 125,000 homes in management. For the same period, it reported 813 new build starts and 860 completions. According to its accounts, it has a development pipeline of 18,000 homes.

Work on the scheme is expected to start around the middle of next year subject to planning permission.