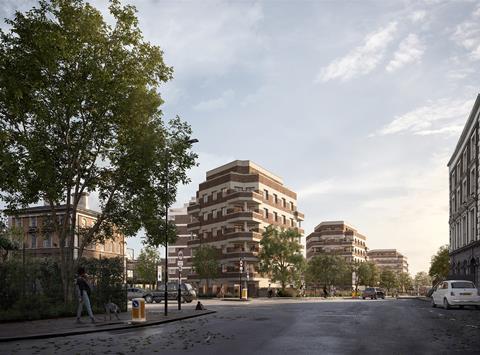 The governing body for London’s financial district has won planning for 91 social housing homeson an existing estate in the neighbouring borough of Islington.

The City of London Corporation scheme at the York Way Estate will also provide a community centre, landscaping improvements and new play spaces.

The application drawn up by Maccreanor Lavington and Erect Architecture proposes three small apartment buildings along York Way with a fourth building, mostly comprised of two-storey three-bedroom maisonettes, built on the eastern side of the estate near Caledonian Park.

The architects said the new buildings had been designed to complement the existing estate, including careful positioning to respect residents’ access to daylight and long views.

The scheme was given unanimous approval by Islington council in a decision welcomed by the City of London which is responsible for the estate.

Ruby Sayed, chair of the City Corporation’s community & children’s services committee, said: “These 91 new affordable homes for purely social rent will be delivered alongside re-landscaping of the entire estate and construction of a brand-new community centre for the benefit of existing and new residents.”

Grant funding from the Greater London Authority was secured for the new social homes.