Be First lodges plans for next stage of estate overhaul

More than 40% of homes will be affordable 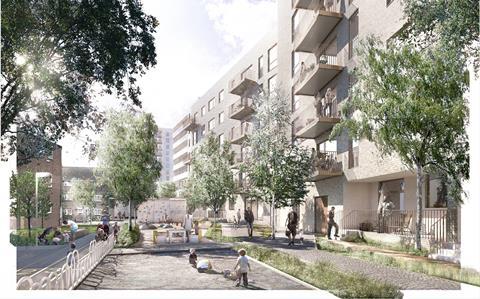 The application for the latest stage of redevelopment of the Gascoigne Estate in Barking has gone in for planning.

Be First, Barking and Dagenham council’s regeneration company, has submitted designs for more than 200 new homes, which will be built on Abbey Road on the western side of the estate. More than 40% of the new homes will be affordable.

Wates has already been appointed to the £55m project in east London.

Allies and Morrison is masterplanner on the overall scheme, while this stage was designed by White Arkiteker. HTA is designing stage three, while the scheme’s first phase was drawn up by Levitt Bernstein.

The consultation, which took place in June and July this year, resulted in a number of changes, including the addition of more children’s play space, extra amenity space for residents’ use at roof level and the improved the layout of some of the family homes.

The council is expected to make a decision in November.