Thousands of new homes ‘uninsurable’ due to flood risk

As many as 70,000 homes affected, Conservative think tank estimates

As many as 70,000 new homes have been built on sites at risk of flooding since 2009, according to analysis by Conservative think tank Bright Blue, making them potentially uninsurable. 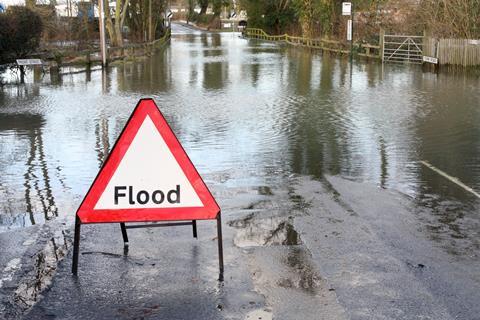 The analysis says that while many of these dwellings are in London and protected by the Thames Barrier, 20,000 of these homes have no flood protection at all, putting them at high risk of becoming uninsurable.

The analysis comes after two weeks of storms left more than1,000 UK homes flooded, with some areas experiencing the highest rainfall in 200 years.

In 2016, the government and the insurance industry signed a deal – named Flood Re – which ensures homeowners in areas of high flood risk can obtain affordable insurance. However, the deal only applies to homes built prior to 2009, leaving those buying new-build homes at risk of sky-high premiums or being unable to find insurance.

Despite that, government land use change data suggests around 10% of new homes built each year are sited in areas of high flood risk, equivalent to National Flood Zone 3. This classification covers areas it is estimated will flood once every hundred years.

Currently, national planning policy strongly discourages residential development in areas of flood risk; however, it does not rule it out entirely. With many towns and cities located on rivers, many of the most attractive development sites have some flood risk.

Bright Blue said there are clusters of new-build homes in areas including the Humber river basin in Yorkshire and Humberside, Somerset, Lincolnshire and the Fens, the Thames Estuary, the Trent and Soar in the Midlands, Merseyside and Greater Manchester, and the Lancashire coast.

Of the 70,000 new homes in flood-risk areas, it said 3,000 are “greatly at risk”, since they are located in areas where at least half of residential properties have the highest flood risk, equivalent to one-in-30 or higher annual chance of flooding.

Helen Jackson, associate fellow of Bright Blue and author of the analysis, said the government needed to change policy, allowing homes built more recently than 2009 to be covered by Flood Re, and giving home owners more information.

She described the current approach as “heartless”. “Government policy over the past decade has seen individuals as entirely responsible for finding out their flood risk, but obviously many are simply not aware,” she said. “Government needs to step in to make sure people are informed.”

“As a society, we mustn’t sleepwalk into loading the costs of climate change onto those least able to bear them.”

However, Mark Shepherd, assistant director at the Association of British Insurers, said: “There are lots of sensible suggestions in the report, but extending Flood Re to properties built after 2009 is the wrong answer and would mean all homeowners paying the cost for poor development and building on unprotected flood plains.

“We must have a zero-tolerance approach to inappropriate development in flood risk areas and bring forward stronger measures to prevent this from happening, not measures that further incentivise it.”