Residents living on the same housing development as the building in south London which was destroyed by fire last week have been told to evacuate their homes in the event of a blaze, rather than follow a “stay put” policy.

Fire ripped through the four-storey Richmond House block on The Hamptons housing scheme in Worcester Park, Sutton, in the early hours of last Monday morning.

Very little of the timber-framed building was left standing after the fire, which was fought by 125 firefighters.

The building was built by St James, a division of Berkeley Group, and is owned by Metropolitan Thames Valley housing association.

Now St James has written to residents living in other buildings on the scheme, warning them to be prepared to leave their homes immediately if fire breaks out in their property.

The letter, dated 9 September, the day of the fire, said: “The London Fire Brigade [LFB] has started investigating the cause of last night’s fire but this will take some time to establish.

“In the meantime we have agreed with them some immediate steps to ensure that residents can feel reassured. On the advice of the LFB the previous stay-put policy has been suspended and we are now operating an evacuation policy for all blocks.”

The letter said ongoing 24-hour patrols would be carried out, with watchmen sounding a klaxon if they discover a fire. Residents would be required to “immediately evacuate the building”, the letter added. 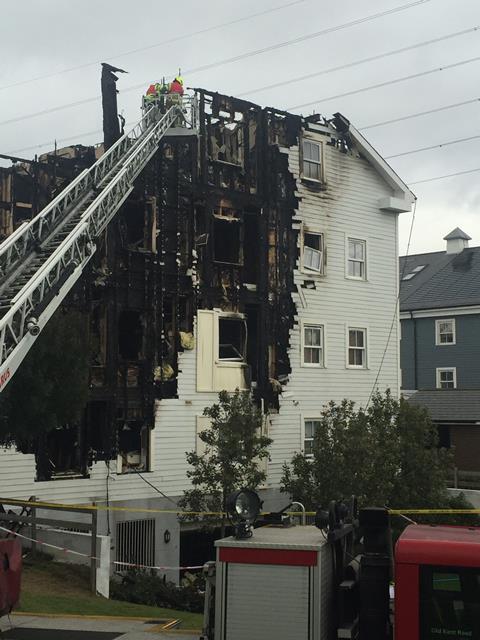 More than 100 firefighters tackled the blaze

The Worcester Park incident is the latest in a spate of recent devastating fires, following blazes at a housing scheme at Barking Riverside, east London, plus other buildings including a care home in Crewe, a Holiday Inn in Birmingham and a Premier Inn in Bristol.

Fire expert and surveyor Arnold Tarling told Building that based on his limited visit to the site on 11 September, the design appeared to comply with the letter of Building Regulations guidance in Approved Document B. But he also warned that, in his view, it did not meet the legal regulation itself – which requires buildings to “adequately resist the spread of flame” over the walls.

Tarling said a cementitious board should have been placed between the timber frame and the cavity. He also said that during his visit he saw “no evidence of horizontal or vertical fire-stopping” on the block that had burned or a neighbouring block that had been opened up. A spokesperson for St James confirmed the block in the Hamptons development was built from timber frame but added it had been clad with “fibre reinforced Portland cement cladding planking of limited combustibility” – a view verified by Tarling.

The rash of recent fires is prompting concern about whether the purpose of building regulations, currently designed to save lives but not buildings, needs to be looked at.

Jim Glockling, technical director of the Fire Protection Association, said: “We have to consider if personally this is what people expect the regulations to be doing.

“The regs are essentially about evacuation before collapse; not stopping a fire but slowing it down.”