Developer Pocket Living has submitted plans for a 436-home build-to-rent scheme next to the Grand Union Canal within the bounds of the Old Oak and Park Royal Development Corporation.

The developer, which has until now specialised in small but well-designed homes in the capital for first time buyers, said it had commissioned Grid Architects to draw up plans for the scheme at Atlas Wharf, which will include 35% affordable housing. 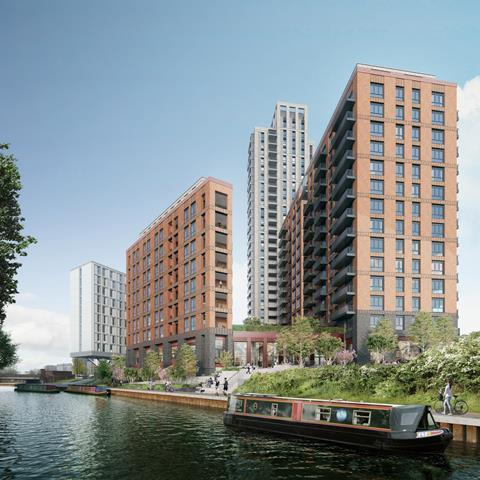 The scheme was designed for Pocket by Grid Architects

The development across three separate buildings will include studio flats along with one-, two- and three-bed homes.

Pocket Living said the project, which include shared amenity spaces, shops and a landscaped garden, is designed to provide homes for young “middle-earning professionals”, and forms part of a shift by the firm to focusing on larger brownfield sites.

Marc Vlessing, Pocket Living chief executive, said the maturing of institutional investment around build to rent on one hand and the fact that many of the purpose-built schemes developed so far focused at the higher end of the market, meant “there was scope for us to deliver a BTR format that would sit comfortably with Pocket’s for-sale brand.”

In September Pocket, set up in 2005, said it had secured more than £20m of funding for its 90-bed Forest Road development in Walthamstow, in a deal which it saw as a blueprint for plans to expand outside of the capital for the first time.