Plans go in for film-themed student resi block in Brighton

Student residential developer Alumno has lodged plans with Brighton council to build a film-themed building for the city’s Screen and Film school.

It will be Alumno’s second project in Brighton, with the firm having recently started work on a student residence for the British and Irish Modern Music Institute in the suburb of Falmer. 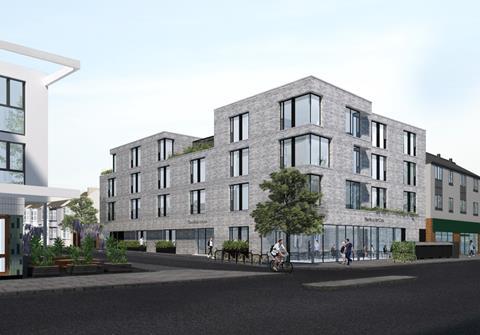 How the building will look when finished

Designed by architect Greenaway, the 60-room block will be three and four storeys high and include a rooftop garden and cinema room.

The film school and Greenaway will collaborate to develop a film theme for the block including an art installation or mural.

It is not the first themed student residential block for Alumno who earlier this year held a competition for local poets in Norwich to submit poems to be engraved into the entrance of Benedict’s Gate, a 302-room project that is due to complete in autumn this year.

The winning poem, which had to include the names of all twelve of the city’s medieval gates, was Sisters Of The Gated City by Jenny Paglin.