The senior civil servant responsible for fire safety guidance knew there was a “clear risk” of a major cladding fire three years before Grenfell but failed to warn the government’s chief fire and rescue advisor.

Brian Martin, who was in charge of fire safety regulations in buildings for nearly 17 years before the Grenfell Tower fire, told the inquiry into the 2017 blaze that he “didn’t really know” why he had not warned Peter Holland in a February 2015 email exchange about the dangers posed by the use of combustible ACM panels in the UK.

Thursday’s hearing focused again on an ambiguous passage in the fire safety guidance that was intended to ban the use of ACM.

The passage, added in a 2006 revision of the guidance written by Martin and his civil service team, stated that “filler” materials in cladding systems needed to obtain the tough fire standard of limited combustibility.

The phrase was a last-minute addition that was never subjected to consultation with the industry and lacked a clear definition. 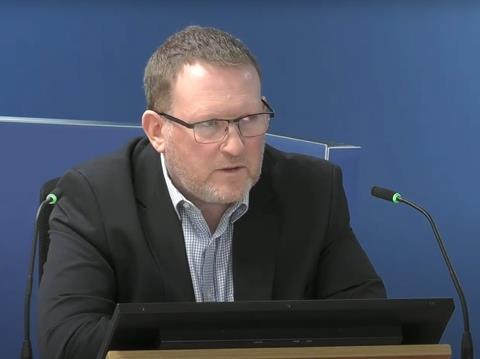 It was also contained in a passage titled “Insulation Materials/Products”, leading many in the industry to believe that the word only referred to insulation products and not to cladding panels.

Martin accepted that he had been aware from July 2014 that parts of the construction industry had been misinterpreting the passage after he was warned at a meeting with fire safety experts organised by the Centre for Windows and Cladding Technology.

But he had not shared this with Holland, who had emailed Martin following an ACM fire at the Torch Tower in Dubai, and accepted he had instead “lulled” Knight into a “false sense of security” about the risk of a similar fire occurring in the UK.

Martin told Holland that there were “provisions in the building regulations designed to prevent this kind of problem, so this shouldn’t be a problem in the UK”, adding: “There are, of course, no guarantees”.

Counsel to the inquiry Richard Millett asked: “You knew by this point that the guidance… was not being correctly understood in the sense you intended it by at least some of its intended audience; yes? You’d known that from July.”

“And that therefore you knew that there was a clear risk that the guidance couldn’t be applied correctly… by at least that group of readers; yes?” Millett asked.

“And that therefore there was a clear risk that the fire, just like that at The Torch building, might well not be prevented, because people in the industry, for some years beforehand, had not understood [the guidance] in the way you’d intended it?” Millett asked.

Martin said: “I think that’s a fair point. I think at the time it was one of a number of issues that could have arisen, I guess. I don’t think I’d have treated it differently.”

Asked if he had not considered alerting Holland to the “widespread lack of consensus” about the passage on cladding materials, Martin said “I didn’t at the time, no”.

Asked why, he said: “I don’t really know”, adding Holland’s role had been reduced. “When Mr Holland took over the job, the remit had become quite narrow, and maybe that’s what I had in mind, I don’t know”.

Millett suggested that Martin had given his reassurances to Holland with his “fingers crossed”, knowing that there was “at least a significant proportion” of the industry which had been misinterpreting the phrase “filler”.

“That’s hardly sending the message, is it, to Peter Holland that there is a sizeable chunk of the building industry who does not think or did not think for some years that a core of a composite rainscreen panel needed to be of limited combustibility? Is it?” Millett asked.

Martin accepted that it “would have been better to… bring that more to the front than perhaps I did at the time.”

“But it’s worse, isn’t it?” Millett said. “Because by not doing that, do you accept that you lulled him, and others reading this, into a false sense of security?”

The inquiry has already heard that Martin had agreed at the meeting with the CWCT to draft a “frequently asked questions” (FAQ) document clarifying the meaning of the word “filler” and to publish it on the government’s website.

The FAQ was never published, with Martin telling a hearing earlier this week that he had “forgotten” about the request because it had been a “busy time”.

He has also admitted that he “completely underestimated” the hazard posed by ACM, adding “I think if I’d fully understood it, I may have put more time into this issue”.

ACM, which was used on Grenfell Tower and has been found by the inquiry to be the “primary cause” of the rapid spread of flame which caused the deaths of 72 people, was only explicitly banned by the government in December 2018, a year and a half after the fire.