Designers and building control bodies were expected to “work out for themselves” what an ambiguous passage in official fire safety guidance was supposed to mean, the former civil servant in charge of the rules has said.

Brian Martin told Tuesday’s hearing of the Grenfell Inquiry that he thought the approach was “okay” at the time but admitted that “it’s evident it didn’t work”.

Martin, who had been in charge of fire safety in buildings for 17 years by the time of the Grenfell Tower fire, was questioned yesterday on a key passage in the guidance which has become a central focus of the inquiry.

Rules written by Martin and his team in 2006 stated that “filler” materials in a cladding system needed to comply with the tough fire standard of ‘limited combustibility’.

But the phrase, which was a last-minute addition to the guidance, had not been put out to consultation with the industry and there was no clear consensus on its definition.

It was also located in a passage titled “insulation materials/products”, meaning that many in the industry understood it as only referring to insulation products rather than cladding panels.

The inquiry has already heard that the passage led to a “ten-year legacy of misunderstanding” in the industry because of its ambiguity. 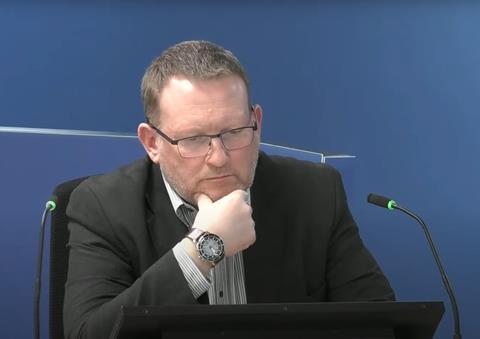 The government insisted in the wake of the Grenfell fire that the phrase also applied to the core of combustible cladding panels, including the plastic core of products such as ACM cladding - the type which was used on the West London tower and has been blamed for the rapid spread of flame during the 2017 blaze.

Martin said yesterday that his team had intended to get designers and building control bodies to think “broadly” about what elements of a cladding system needed to be of limited combustibility.

Counsel to the inquiry Richard Millett QC asked they were expected to “take this broad, portmanteau expression and just work out for themselves what fell within it”.

“Yes, I think to some extent that’s what we were trying to do, yes”, Martin replied.

A series of cladding fires in the Middle East in the years before the Grenfell fire had been discussed by Martin and his team.

The hearing was shown a December 2012 email about the Tamweel Tower fire in Dubai, which occurred the month before, in which Martin said: “have you seen the video? It’s awesome.”

Martin said in his witness statement that it was his view that fires of this kind “should not occur in England provided that [the guidance] was applied correctly”.

Millett asked Martin if he thought the phrase “filler” was sufficiently well understood “universally across the piece, across industry, even though that phrase had never been subjected to any of the ordinary processes for change for guidance, no public consultation… the absence of a definition, absence of…scrutiny”.

“At the time I thought it was okay, yes”, Martin replied.

“So why put it in under ‘Insulation Materials/Products’ as a heading?” Millett asked.

“I think because we thought that the ‘/Products’ meant things that weren’t insulation”, Martin said.

“How could you possibly have thought that?” Millett asked.

“That’s what we thought at the time.” Martin said.

Later, the inquiry was shown an email in October 2010 in which Martin said that putting a fire safety campaigner in charge of drafting the guidance wouldn’t “necessarily be in the best interests of UK Plc”.

“What would be wrong with letting somebody… who had life safety as their absolute priority craft the regulation?” Millett asked.

“The country would be bankrupt” Martin said, adding: “We’d all starve to death, ultimately, I suppose, if you took it to its extreme…That’s the policy conundrum governments are faced with… you need to balance the cost of regulation with its benefits.”

“So death by fire or death by starvation and that’s for the government to choose between?” asked Mr Millett.

“I don’t think anybody talked about it in those terms, but that’s the principle.” said Mr Martin.