Council-owned developer Populo Living is to push ahead with a £62m regeneration scheme in Plaistow, east London, with the appointment of Vistry Partnerships to undertake the build.

Populo, a housing company wholly-owned by Newham council, has said that Vistry’s partnerships business will build the 182-home Plaistow Hub project, which includes a 23-storey tower plus more housing and a new local centre around Plaistow underground station.

As well as the London Road tower, which will provide 100 flats for private rent, the scheme will see construction of a 15-storey tower on a separate site providing 82 private rent flats and a new library, a supermarket and piazza designed to improve the local streetscape. 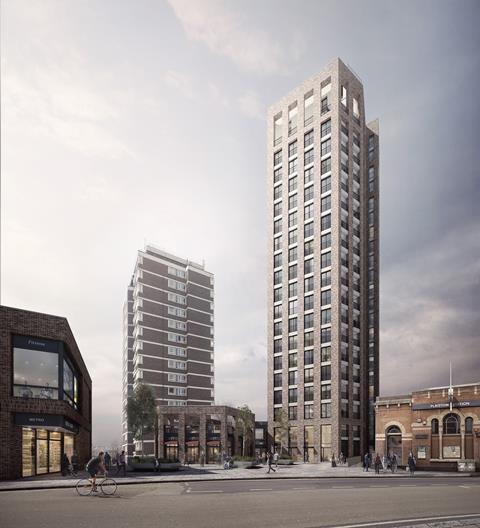 Profits from the scheme will pay for the provision of 112 homes for affordable rent elsewhere in the borough. Construction is to start immediately, with completion earmarked for August 2023.

Populo, which was rebranded from its original incarnation as Red Door Ventures in June, is committed to building 2,300 homes by March 2022, half of which will be to the London affordable rent benchmark. The firm claims to be on course to start work on 884 homes by March next year.

Vistry was created from the merger of Bovis Homes with Galliford Try’s housing businesses at the start of the year.

Deborah Heenan, chief executive of Populo Living said: “The Plaistow Hub project will provide fantastic new community facilities and much-needed housing. It will also help deliver 112 affordable homes in the local area thanks to the mayor’s support for Populo Living.”

Stephen Teagle, chief executive of Vistry Partnerships, said the appointment was great news for the firm’s London business. “We are delighted to be working with Populo Living to deliver much-needed, high-quality housing within this area of ongoing regeneration,” he said.