The supplier of the ACM cladding used on Grenfell Tower changed the composition of one of its products without informing a UK certifying body, the inquiry has heard.

Arconic added chemicals to the combustible plastic core of its Reynobond PE panels to change the colour from translucent to black but did not formally update certifier the British Board of Agrement (BBA) about the change, Wednesday’s hearing was told. 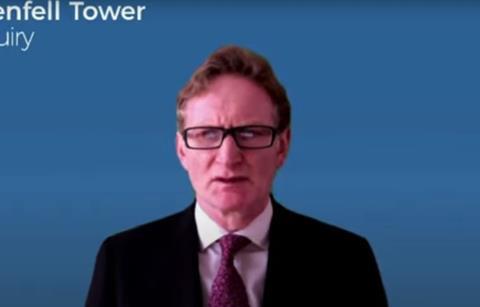 Former BBA deputy chief executive Brian Moore said that he first learned of the alteration when he was told by BBC journalist Tom Symonds in January 2018, seven months after the Grenfell fire.

Symonds told Moore that he had information that suggested that the ACM product had been changed in 2015 and had met Moore to ask if the BBA was aware of it.

Moore said that the BBA had no record of being informed of any change to the core of the product, which the certifier had issued a certificate for in 2008 giving the panels a Class 0 rating.

Moore then emailed Arconic technical manager Claude Wehrle in February 2018 asking for an explanation of Symonds’ allegations and requesting a response within six days.

After the deadline was missed, he emailed Arconic president Claude Schmidt with the same query.

Eventually Moore received a telephone call from Wehrle, who said that the colour of the PE core had been changed to make it “aesthetically more pleasing” to the market.

Asked why the BBA had not been informed of the change in chemical composition, Wehrle said that Arconic staff had provided a BBA inspector visiting the firm’s factory at Merxheim in France in September 2017 with binders containing updated fire classification reports and test data for the cladding, but that no action had been taken by the inspector.

Schmidt then emailed Moore to say that the inspector “was not interested” in the binders because they were not relevant to the audit which was being carried out – although Moore added that Schmidt had not said that the BBA had been told about the change to the core of the panels.

Moore said in his witness statement: “Mr Schmidt appeared to be suggesting that the BBA had been provided with the opportunity and means to become aware of changes to the Reynobond PE core, but he stopped short of saying that we had been informed.”

Schmidt then asked Moore to discuss the matter with Arconic’s lawyer, Teresa Hitchcock, who he met in a cafe at the train station in Garston, Hertfordshire, in March 2018.

At the meeting, Moore had asked Hitchcock if Arconic had disclosed the change to the product’s core to the BBA.

He told the inquiry that, according to his notes of the meeting, she had told him that Arconic staff had “pointed out” the files detailing the change to the inspector but did not describe this as “disclosure”.

He added that his notes recorded that Hitchcock “can’t provide a reasonable explanation as to why they didn’t tell us”.

Moore said that the Metropolitan Police, who had by this point become involved, had urged him to speak to the BBA inspector who had visited the Merxheim factory, Shaun O’Neill.

According to Moore, O’Neill had said that no material outlining the change in the core of the cladding had been pointed out to him.

The inquiry has already heard that Arconic had failed to tell the BBA that the version of its PE cladding which was installed on Grenfell tower had “performed disastrously” in a failed 2005 fire test.

Giving oral evidence to the inquiry last month, Schmidt had said that the BBA “could have found out” about the failed test result in an audit.

He had denied that the firm’s failure to disclose the results of the test was “deliberate concealment”, although he agreed that it could be seen as a “misleading half-truth”.

Around 3,000 sq m of this version of the cladding was installed on Grenfell Tower as part of the flawed refurbishment which led to the deaths of 72 people in the disastrous fire in June 2017.

The first phase of the inquiry found that the panels were the “primary cause” of the rapid spread of flame up the side of the tower.