Planning consultant DPP has submitted a hybrid planning application for partners Cityregen and Galliford Try Investments to build 1,143 homes on the site of a former textiles factory.

Leicester City Council received the application for outline planning permission for the homes and commercial units, including pubs and food takeaways, last week for the Corah Factory in the city. 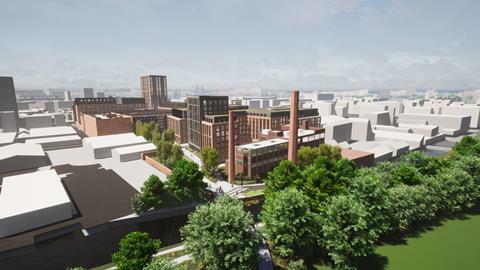 DPP also put in full planning permission at the same time for the demolition of existing buildings on the site, including two chimneys and the face of the 1865 building. The southern façade of the building would be kept and altered, if the plans are approved.

A spokesperson for Cityregen Leicester and Galliford Try Investments said: “The plans will bring new life to this area of Leicester, creating a dynamic new community and destination, which will act as a catalyst for further growth and regeneration in the area. By delivering a significant number of homes, this site can also play a major role in easing the housing shortages facing local people, while creating fantastic new green spaces and public realm in the city.”

The spokesperson added that the plans recognised the historical significance of the site and were aimed at “ensuring the people of Leicester are connected to the Corah Site’s past in its new reincarnation”.

DPP director Michelle Davies said: “This site represents one of the last major regeneration sites in single ownership in the city of Leicester and is a key opportunity to deliver much needed homes.

“We have been through an extensive and detailed pre-application process with the council and major stakeholders during the last year, and we now look forward to progressing this fantastic scheme through the planning process.”

DPP said it will be working “proactively” with the council in the coming months to deliver the regeneration scheme. Consultation on the scheme is due to end on 19 June.