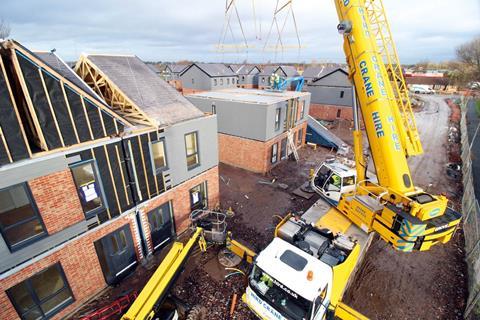 Naylorsfield Drive: Torus’ 33-home development, considered to be the biggest single MMC scheme in the social housing sector at the time

Members of the group of 12 housing associations and local authorities will advertise their modern methods of construction (MMC) schemes on the Dynamic Purchasing System portal to invite bids from the eight firms.

JV North, which has members covering Greater Manchester, Merseyside and Cheshire, started looking for SMEs and MMC firms to carry out £250m of work over four years in January. It plans to build about 4,000 homes in the 2021/26 Affordable Homes Programme.

The framework will run until 2026 and the approved companies are:

Chair of JV North Wayne Gales said: “The housing crisis demands responsible homebuilders like our members to think differently and innovate wherever they can.

“If we can find new techniques that streamline the homebuilding process the number of new homes will compound significantly when adopted on a large scale.”

He added: “The greater the volume, the more efficient MMC becomes.”

Gales has written for Housing Today on how partnership working and economics of scale can ensure more homes are built.

The consortium has been going since 2007. In 2016 its member Torus built a 33-home modular scheme in Liverpool, believed to have been the largest off-site development delivered by a social housing landlord in the UK at the time. Following that, Wythenshawe Community Housing Group, another JV North member, completed a Home-England supported five-home modular scheme, which the housing association said reduced waste by 80% by being built in a factory.