The recovery in housing activity slowed down in August, according to the latest Office for National Statistics figures on construction output.

The ONS said housebuilding output grew 11% in May, to £3.3bn, and was now just shy of 7% below the level seen in February prior to the onset of the pandemic.

While that would be seen as staggering growth in a normal year, this year it represents a sharp slowdown in the recovery from lockdown, compared to growth of more than 30% in both June and July.

Nevertheless, the figures represent the fourth month significant increases in housebuilding work, following a fall in output of more than 60% due to lockdown, when most housebuilders temporarily shut sites.

However, the figures showed that the housebuilding sector remained the strongest part of the construction industry, in which growth overall slowed to 3% in August, following record monthly growth of 21.8% in June and growth of 17.2% in July. 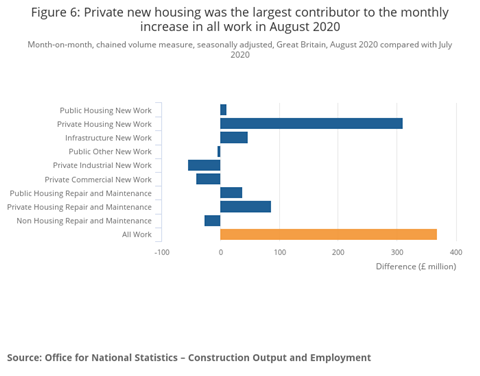 The level of construction output in August remains 10.8% below the level in February.

Mark Robinson, chief executive at Scape Group, said: “Confirmation of further growth will hearten many in the industry whose determination continues to keep order books healthy, albeit below pre-covid levels.

“However, the overall economic outlook remains ominous and construction will be expected to drive the ongoing recovery as other sectors regroup and evolve as government support recedes.”

He said while the UK’s strategy was to use historically low interest rates to invest in public infrastructure it was imperative that contractors and public sector organisations did all they could to get spades in the ground quickly.

Following strong recovery in June and July construction, output grew by a record 18.5% in the three months to August compared with the previous three-month period.

This came after 10 consecutive periods of decline and was driven by record three-month on three-month growth in both new work, 17.5%, and repair and maintenance, 20.3%.

The increase in new work in the three months to August was because of growth in all new work sectors apart from private industrial, which fell by 6.5%. The largest contributor to the growth was private new housing, which grew 34.9%. 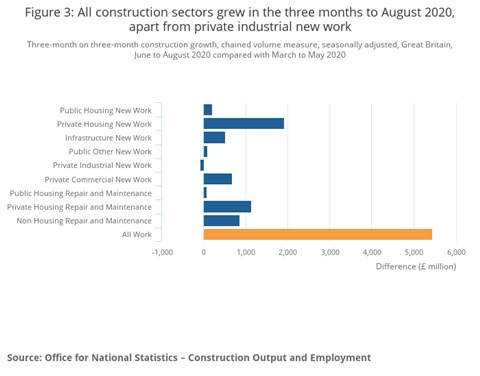 Despite this three-month growth figures Clive Docwra, managing director at McBains, said there was a reluctance among investors to put cash into future projects.

He said: “The unpredictability around further lockdowns is causing private commercial investors to remain cautious of committing to new developments.

“The government needs to ramp up its public infrastructure programme and speed up procurement to help tide the sector over while this fragility persists.” 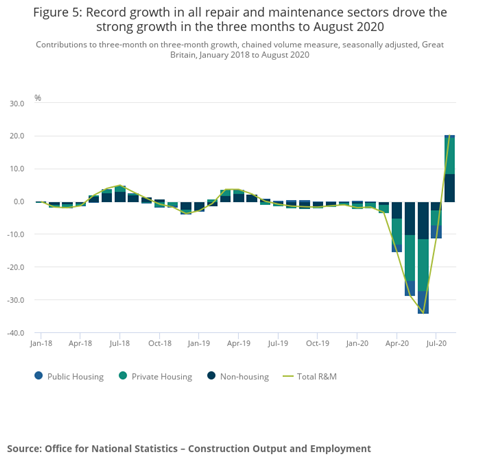