The housing ministry has set out plans to create a new base in Wolverhampton that will serve as a “dual HQ” with its existing London headquarters.

Housing secretary Robert Jenrick said the move was “historic” and would see the Ministry of Housing Communities and Local Government’s West Midlands headcount rise from the current 300 to 500 by 2025. Homes England now has its national headquarters in Coventry.

He said the Wolverhampton HQ would have a “regular ministerial presence”, in a first for a departmental centre outside of the capital, and that senior civil servants would also be based in the building. The move comes against the backdrop of wider government plans to move 22,000 civil service jobs out of London by the end of this decade. 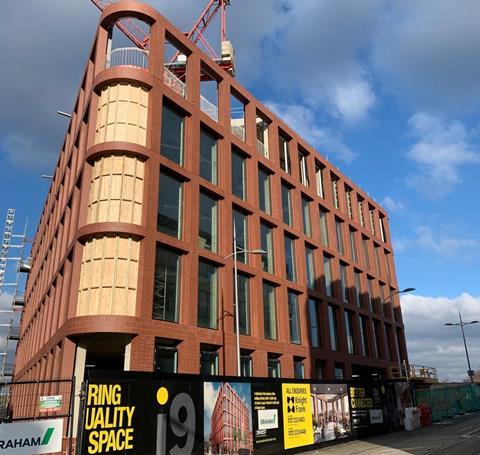 The i9 building in Wolverhampton

The Ministry of Housing Communities and Local Government (MHCLG) said that an announcement about the exact location for its new base would be made in the spring. But a strong contender will be the Glenn Howells Architects-designed i9 building in Wolverhampton city centre, which Graham Construction is due to complete this summer.

Wolverhampton city-council committed £13m towards the speculatively-developed office building in 2018 with a view to attracting new government jobs to the area. MHCLG’s plans to open a Wolverhampton outpost were rumoured in November.

Jenrick said MHCLG’s base would be the “first ever ministerial office outside of Westminster” and would mean more local voices could feed into policy-development and greater career opportunities were available outside of the capital.

“With a dual headquarters in Wolverhampton my department will not only change where we work but how we work, signalling the end of the Whitehall-knows-best approach,” he said

Jenrick was born in Wolverhampton and was a pupil at the independent Wolverhampton Grammar School. He lives in Herefordshire and is MP for Newark in Nottinghamshire.

MHCLG’s London base is at the Terry Farrell-designed Fry Building. It is part of the 2 Marsham Street development, which houses the Home Office and the Department for Environment, Food and Rural Affairs.