Grenfell cladding compliance was responsibility of others, manufacturer tells inquiry

The maker of the cladding panels used in the refurbishment of Grenfell Tower has said It was the “responsibility of others” to ensure the materials complied with building regulations.

Arconic told the inquiry into the fire in June 2017 that the project team behind the tower’s disastrous refurbishment had “failed to adequately analyse the regulatory regime and to determine how they were to comply with it”.

The firm, which was making closing statements for the inquiry’s modules looking at the refurbishment and the materials used, manufactured the combustible ACM panels used in the building’s cladding system.

The first phase of the inquiry found that the cladding acted like a “source of fuel” for the fire, which ripped up the sides of the tower, leading to the deaths of 72 people.

Arconic also “emphatically rejected” that it had misled the British Board of Agrement (BBA), a certifying body, about the performance of the panels in fire tests. It said the wording of the certificate “was the responsibility of the BBA and was not misleading”. 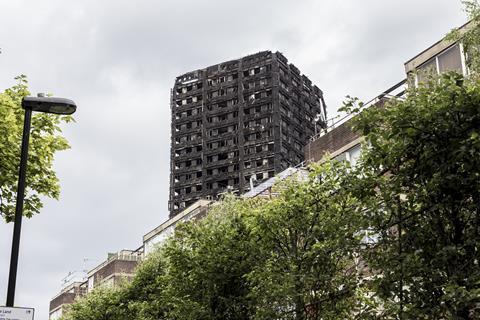 The panels, known as Reynobond PE, were used on Grenfell Tower in a form which was fabricated into cassettes and hung on rails.

The inquiry has already heard that, while another version of the panels which were attached to walls with rivets had achieved a Euroclass B rating in fire tests – allowing them to be used on buildings above 18m – the cassette form had performed “disastrously” in a failed 2005 test, achieving a Euroclass E rating.

Arconic argued in its closing statement yesterday that the panels, which were supplied to customers in an unfabricated form, were “capable” of achieving a Euroclass B rating.

It admitted that this did not mean that the rating would be achievable in all circumstances, adding that the BBA and Arconic were “fully entitled to proceed on the basis that those to whom the panels were supplied would take responsibility for assessing the fire performance of the chosen fabrication”.

And it said that it would be “illogical and inappropriate” to impose any wider responsibility upon the BBA or Arconic in relation to how the panels were fabricated or used.

It added that it was “unnecessary” for the BBA certificate to make reference to the different reactions to fire of the panels depending on whether they were in rivet or cassette form.

The closing statement concluded that it would be “wrong and unfair” for the inquiry to pin blame for the fire on Arconic, as those who had carried out the refurbishment of the tower had failed to apply the regulatory regime to their work.

In March, the inquiry heard how Arconic had ignored at least 11 separate written requests by the BBA for information about changes to the product that would affect the certificate for the panels.

The BBA eventually renewed the certificate based on information on Arconic’s website. The body was not told that the fire rating of the riveted form of the panels had in fact been downgraded from Euroclass B to C in 2014, and the cassette form confirmed with an E rating.

BBA chief scientific officer John Albon admitted that the BBA’s failure to insist on the information from Arconic was “a very basic failure of due diligence”.

But he added: “I don’t think our procedures anticipated a situation where there would be deliberate misrepresentation of the performance of the product with a fire safety-critical aspect of performance such as this.”

The inquiry has also heard how Arconic manager Claude Wehrle warned colleagues two years before the fire that Reynobond PE was “dangerous” and should be swapped for a safer fire-retardant version “as a matter of urgency”.

And the firm was warned as early as 2007 that the panels could be deadly, with marketing manager Gerard Sonntag describing how a cladding expert at an industry event had said that 5,000m2 of ACM would have the same “fuel power” as a “truck of 19,000-litre oil” in the event of a fire.

The next module of the inquiry will focus on how central and local government responded to the disaster.