The president of Arconic has denied that it was “deliberate concealment” not to tell British regulators that its cladding product had burned in a test, the Grenfell inquiry has heard.

Arconic president Claude Schmidt told Wednesday’s hearing that the British Board of Agrément (BBA) “could have found out” about the test results of its Reynobond PE cassettes, which were installed as part of Grenfell Tower’s ill-fated refurbishment.

In 2005, the firm had tested two versions of its Reynobond PE cladding, a type of combustible ACM which included a 100% polyethylene core.

The first had been on a riveted form of the product, which had resulted in a Euroclass B rating, allowing it to be used on the external walls of high rise buildings.

The second test was on a folded version, known as cassettes, which the inquiry heard had “performed disastrously”, releasing seven times more heat and three times as much smoke than the riveted version.

But Arconic only supplied the results of the first test to the BBA when applying for a certificate to allow both versions to be sold on the UK high rise market - despite the terms of Arconic’s contract with the BBA requiring the supply of all available test data.

The BBA then issued Arconic with a certificate for both products stating that they achieved a Class 0 rating, the British equivalent of the Euroclass B rating. 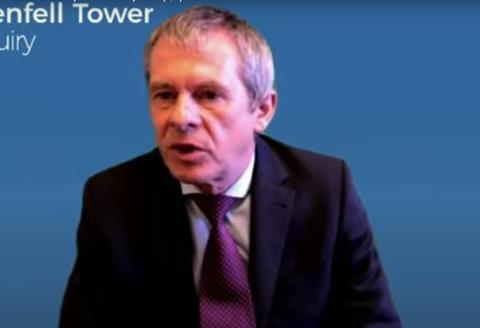 Asked by lead counsel to the inquiry Richard Millett QC if Arconic was “legally obliged” to provide the test data of the cassette form of the product to the BBA, Schmidt replied: “Yes, probably.”

Asked by Millett if Arconic regarded that it was “up to the BBA to ask for the right test data and certificate rather than for Arconic to volunteer it,” Schmidt said that the BBA could have picked up the data in an audit.

Millett then asked if Arconic was “taking a chance on whether or not the BBA might later pick up that fact in an audit,” to which Schmidt replied: “Yes, I think so, yes.”

But Schmidt added: “I have got a problem with that notion of running a risk or running…having to be exposed by chance. I mean, it may be that’s not the right word, but if that’s true, something had never been mentioned on the subject, it could have been found out, discovered, during an audit.”

Millett asked: “Do you accept, as the voice of Arconic, that not providing [the cassette test] to the BBA was a deliberate concealment of what Arconic knew to be the true position, namely that the cassette variant of Reynobond 55 PE performed disastrously in a fire?”

Schmidt replied: “No. When you say deliberate, that’s too much.”

But when asked by Millett if only supplying the results of the test on the riveted version of the product as representative of the fire performance of both versions was a “misleading half truth,” Schmidt admitted: “Yes, you can see it like that.”

And Schmidt conceded that the results of the test on the cassette version of the product was “crucial safety information,” although he said that Millett’s suggestion that the data was “life and death stuff” was “too strong”.

Former Arconic technical manager Claude Wehrle has told the inquiry in his witness statement that technical staff had been “puzzled” by the result on the cassettes as “competitors were not exhibiting any problems and no one in the industry seemed to have similar results insofar as I could tell”.

Wehrle admitted that “no one really understood it,” adding that it was believed that the failed test had been a “rogue result,” as the firm had a “general view” that the cassette version would perform better in fire than the rivet type because it had fewer exposed edges.

Because of this assumption, Wehrle said that the marketing, technical and management teams “decided at the time that a classification in category B was satisfactory” and had not considered carrying out further tests.

Asked on Tuesday by inquiry chairman Martin Moore-Bick if it was “irrational and irresponsible” not to carry out further tests, Schmidt replied: “Yes, as I said, I think that extra tests should have been carried out.”

Arconic continued to sell Reynobond PE for architectural use in the UK until 2017, eventually halting supply on 26 June 2017, 12 days after the Grenfell Tower fire in west London.

Around 3,000m2 of the cassette version of the product were sold to the Grenfell Tower refurbishment project.

The inquiry has already found that the cladding installed on the 67m tall tower was the “primary cause” of the spread of the fire, which claimed 72 lives.