Michael Gove has admitted that getting non-UK based housebuilders and products firms to pay into the government’s proposed £4bn cladding remediation fund will be “practically difficult”.

The housing secretary said that ministers may not be able to allocate the cost of building safety works to offshore companies “precisely and with total authority”.

He told a committee of MPs yesterday: “Some of the most egregious transgressors are companies that are based outside of the UK, so there are  some practical difficulties in pursuing them in the way that we would want to.” 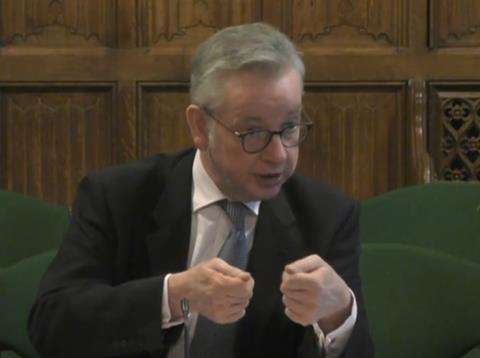 His comments come a week after the Department of Levelling Up, Housing and Communities (DLUHC) unveiled plans to give legal force to its threats to stop developers from building unless they make significant financial contributions to end the building safety crisis.

Gove wants to amend the Building Safety Bill to allow the government to block planning permission and building control sign-off for schemes being built by developers and housebuilders who refuse to pay up.

But the Home Builders’ Federation (HBF) has estimated that more than half of the blocks above 11m built in the UK in recent years have been built by offshore housebuilders through shell companies.

Asked by the cross-party DLUHC select committee how these firms would be forced to pay, Gove admitted that the measures being proposed to target UK-based developers would be less effective on those who are “operating at one, two or three removes”.

He said that the government had “levers we can use to try to pierce the corporate veil” of offshore firms.

He did not reveal what these levers were as he did not want to “show too much of our hand”.

But the minister admitted that UK-based companies are “easier to engage with and easier to be clear about what the consequences of non-engagement might be”.

The HBF has said that that it should not just be UK developers who have to shoulder the burden of the costs.

Gove called the comments “fair”, adding: “If we can’t necessarily allocate precisely and with total authority all of the burden to some players who are hiding behind offshore or other vehicles, [then] what we can do is have a collective approach.”

He was also asked if the government would consider taking the Building Research Establishment (BRE), a product testing firm which was privatised in 1997, back into public ownership following evidence heard at the Grenfell Inquiry.

Gove, who described the evidence as “deeply concerning”, said he could not make a commitment that the BRE would be nationalised but said he was “open minded about what the best way is to fixing the regime”.

In the last two weeks, the inquiry into the 2017 fire which killed 72 heard that the BRE had failed to warn the construction industry about the dangers of unsafe cladding despite repeated warnings.

There are currently nearly 500 buildings in the UK which contain combustible ACM cladding, the type blamed for the spread of flame at Grenfell.

The total cost for repairs to buildings deemed unsafe is estimated to be up to £15bn.