A housing minister who was also Theresa May’s right-hand man in Downing Street has been made an advisor at construction consultant Arcadis.

Gavin Barwell (pictured with May) was the former prime minister’s chief of staff for two years before she stepped down last year and was replaced by Boris Johnson, who replaced Barwell with Dominic Cummings. 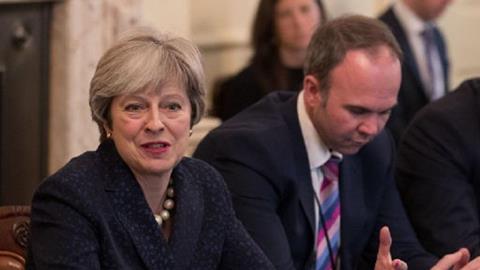 Prior to that, Barwell was housing minister under May from July 2016 until May 2017, before losing his marginal Croydon Central seat in the 2017 general election. He was made a life peer last autumn.

His previous roles in government included government whip, minister of state for housing and planning and separately as minister for London.

Arcadis said Barwell’s role will be to provide strategic advice on a series of priorities around construction, housing, placemaking and urban regeneration.

In this role, Barwell will help develop Arcadis’ residential work as well as its precision manufacture and modular construction expertise.

Barwell’s other advisory roles include work for housebuilder Barratt and housing association Clarion.