Housing association will re-plan Kirkstall road site which already has permission for 1,000 homes

Housing association Clarion has purchased a 13-acre brownfield regeneration site in Leeds with permission for 1,000 homes.

The association’s development arm, Latimer undertook the acquisition of the site between Kirkstall Road and the River Aire with the intention of reworking existing approved plans for the “City Reach” site into a £200m residential-led mixed use scheme. 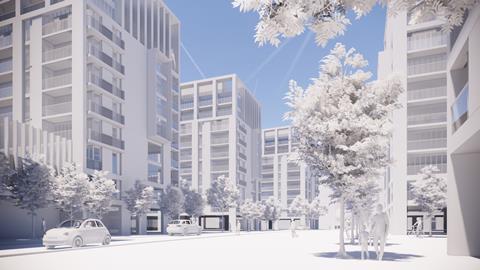 Previously the site had been planned for homes alongside student accommodation, however Clarion said it wanted to create a “thriving community” with new homes built alongside retail units, space for creative industries and leisure facilities.

It said designs will focus on sustainable transport provision into the city centre, and that designs for the residential units will support home working.

Clarion said its plans will include 35% affordable housing but that it was not yet at the stage of being able to say how many homes will be built on the site.

It said it hoped to be able to submit a revised planning permission in early 2021.

Clarion’s purchase was welcomed by councillor Debra Coupar, executive member for communities at Leeds Council, who said it was “an exciting opportunity to create a new community in the heart of Leeds, alongside the delivery of much needed affordable housing.”

Richard Cook, group director of development for Latimer, said: “Our vision is to give a new lease of life to the site, kick-starting a residential-led mixed-use regeneration along the River Aire and Kirkstall Road which has been a vison for the City of Leeds for more than ten years.