Housebuilder’s 2021 completions to be within 1,000 homes of pre-pandemic level

Barratt is to build nearly a thousand more homes in the year to June than previously anticipated after seeing strong demand for its properties during the spring.

The new guidance, issued in a trading update this morning, puts the UK’s biggest housebuilder on course to complete between 16,000 and 16,250 homes this year, without including joint ventures. 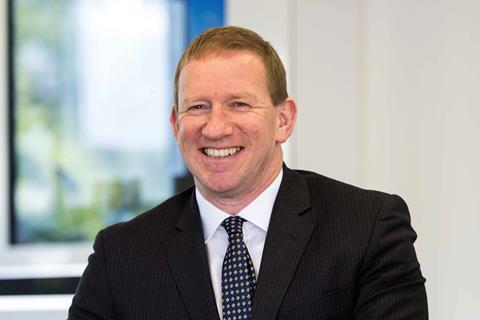 Chief executive David Thomas (pictured), said: “We have seen strong demand for our high quality, energy efficient homes on well-designed developments […]. As construction activity has increased our employees and sub-contractors have worked hard to maintain our high standards of quality and service.”

The upgrade came as the firm reported site sales per week between January and the start of May of 0.83, sharply up on the lockdown-affected 0.52 reported last year, but also above the 0.79 seen in 2019.

The firm added that it remained committed to expanded volume in the medium term to its operational capacity of 20,000 homes. Barratt said it had already sold all the homes deliverable in the current financial year to the end of June 2021, with forward sales up at £3.7bn, well above the £2.8bn reported in 2020.

The firm said it had opened 57 new sites in the first four months of 2021, almost double that in the same period last year, operating from an average of 346 sites.

However, the firm also admitted it had made a another big write-down to pay for the remediation of previously built “legacy” properties in the wake of the post-Grenfell cladding crisis. The firm said it had now allocated £163m since the start of the crisis to fixing problems identified in the wake of the Grenfell tragedy, a rise of more than £50m on the cumulative totals previously announced.

The allocation comes after the firm revealed last September a further £51m of spending would be required in the current financial year, taking the allocation this year alone to more than £100m.

It said it had spent £31m in cash in the period repairing its Citiscape scheme, and that in total, £85.6m of the £163m allocation remained to be spent.

Despite this, shares in Barratt rose as much as 2% in early trading.

David O’Brien, equity analyst at Goodbody said the figures represented “a very positive trading statement”. He said: “The group has also noted its completions in the financial year to date are significantly ahead of comparatives, reflecting not only strong underlying demand but also a focus on delivery of units before the original Help to Buy scheme and stamp duty holiday deadlines.

“We expect demand to continue to go from strength to strength as the housing sector acts as a key driver of UK economic recovery from Covid-19.”