Three towers will contain a total of 338 flats 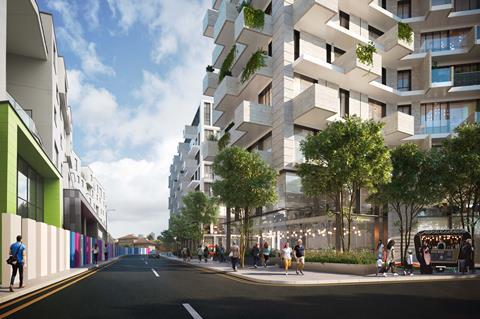 Southwark council has given the go-ahead last night for 338 falts, more than a third of which will be affordable, to be built in three towers near the Old Kent Road in south London.

The three towers, which rise from 16 to 22 storeys, will be built by Argon Capital on a brownfield site on Verney Road, part of the Old Kent Road opportunity area.

The Spparc-designed development will contain more than 5,200m² of commercial co-working space for start-ups.

The architect said the design took inspiration from the area’s industrial heritage, with cantilevered balconies stacked in reference to the stacked timber yards which once lined the nearby Grand Surrey Canal.

Pathways through the site will link courtyards, play areas, a lateral park and other public spaces.

Trevor Morriss, principal at Spparc, said: “Working within the context of this extraordinary historic area of London has been a voyage of industrial discovery.

“We are very excited by the potential for this scheme to add enormously to the borough, both in terms of amenity, design intent and community cohesion.”

Spparc has worked extensively in Southwark but is also collaborating with Heatherwick Studio on the other side of London on the redevelopment of Olympia.