Developer Peel is to kick-start work on a 600-home build to rent scheme at its flagship Wirral Waters development after signing a £130m funding deal with the Pension Insurance Corporation.

Peel is now set to name a contractor for the Wirral Waters One scheme in the next few days in advance of work starting on site this year.

The deal with the Pension Insurance Corporation (PIC), which insures big pension schemes to make sure they always have enough to pay members, will see the firm back the purchase of a long-term 50-year lease in the completed Wirral Waters One building by the local council, thereby enabling construction to proceed.

The project will include 500 homes for market rent, plus another 100 homes for rent at 80% of market value. 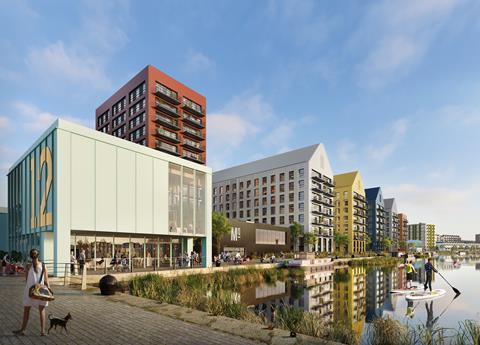 The scheme will be the second major residential project to go ahead as part of the wider 13,000-home Wirral Waters masterplan to regenerate 500-acres of Peel-owned former docklands on the Mersey. Urban Splash is already on site delivering the first of 347 planned modular houses under an earlier deal with Peel.

The scheme is part of the 1,100-home first phase of the Wirral Waters project, which is due to be delivered over the next 3-4 years.

The scheme will be built to the Breeam Excellent standard, and includes sustainable urban drainage and a range of low carbon technologies including solar power, air source heat pumps, and electric vehicle charging points.

Under the deal between PIC, Peel and the council, Peel will develop the homes and take on occupation risk for the houses for the first 10 years of the council’s lease. Its lease is intended to provide a long-term income stream for both the council and PIC.

A spokesperson for Peel said construction work on the build to rent scheme was set to take between two and a half to three years.

James Whitaker, executive director of development at Peel L&P, said the partnership between the Peel, the PIC and the council “will act as a model for other schemes in the future.”

“With Peel L&P taking the occupational and delivery risks, this Build to Rent development will be able to provide a long term revenue income stream to the local authority which could support wider service delivery and future investment,” he said.