The next government must ramp up the amount of domestically-produced timber used in new housing starts across England from the current 22% to 40%, according to a new report. 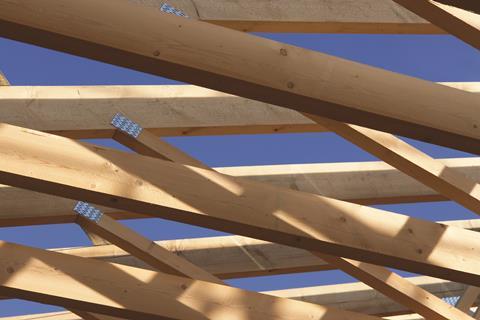 Right-leaning think tank the Policy Exchange said land policy after the UK leaves the EU should encourage the construction sector to use more home-grown timber.

In a new report the group called for timber frames to account for 40% of new housing starts in England, Wales and Northern Ireland by 2025, noting that in Scotland this figure was already over 80%.

The Policy Exchange, which last week questioned housebuilding pledges from both Labour and the Conservatives, said timber frames currently accounted for 22% of new housing starts in England, 17% in Northern Ireland and 30% in Wales.

The UK currently imports more than three quarters (80%) of the 57 million cubic metres of wood products it consumes, the exchange’s report said.

And it highlighted a Forestry Commission estimate that England had between 60m and 100m tonnes of ‘overdue’ timber in broadleaved woodlands, “demonstrating that there is a lot of slack in the market”.

The report also proposed a ‘Forest of Britain’, connecting Land’s End to John O’Groats via Wales, “as a lasting monument to mark the Queen’s platinum jubilee in 2022.

“This would be a two-mile-wide corridor connecting conservation sites along the country to raise the profile of woodlands, containing 300 million trees,” it added.